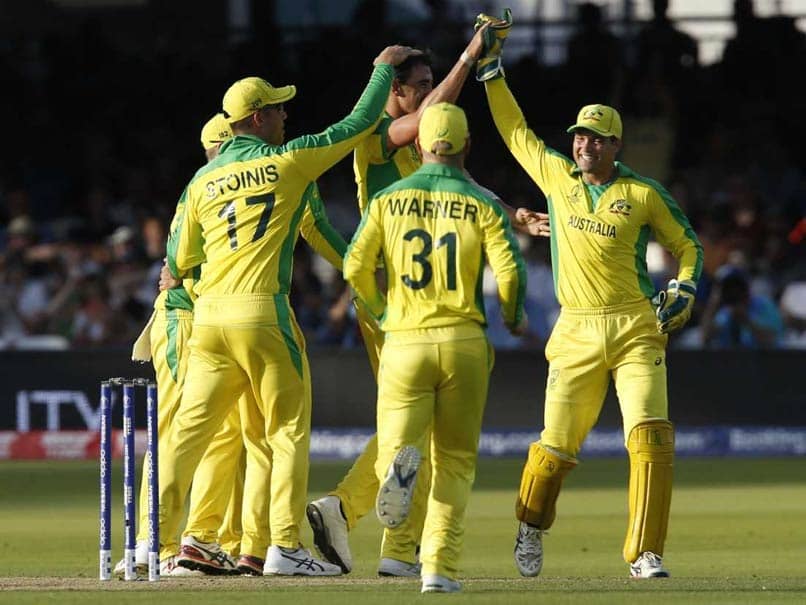 Mitchell Starc claimed a five-wicket haul as Australia thrashed New Zealand by 86 runs in the World Cup 2019 at Lord's on Saturday. Following a dismal batting show, New Zealand were bowled out for paltry 157 runs in their chase of 244. Australia, who have already qualified for the World Cup semi-finals, consolidated their position on the top. New Zealand still require a victory to book a semi-finals berth. Earlier, Trent Boult scripted history, becoming the first New Zealand bowler to claim a World Cup hat-trick, as New Zealand restricted Trans-Tasman rivals Australia to 243 for nine in their 50 overs at Lord's on Saturday. Usman Khawaja top-scored for Australia with 88 runs off 129 balls and stitched a century stand with wicketkeeper-batsman Alex Carey (71). After opting to bat, Australia got off to a disastrous start as they lost both their openers Aaron Finch and David Warner cheaply inside first ten overs. Former captain Steve Smith soon joined them back into the pavilion and left the reigning champions reeling at 46/3 in the 12th over. Australia, who beat New Zealand in the 2015 final, have already qualified for the last four out of the 10-team round-robin phase. New Zealand, on the other hand, need just one victory to book a semi-finals berth. Others who impressed for New Zealand were Jimmy Neesham (2/28) and Lockie Ferguson (2/49). Skipper Kane Williamson, who bowled seven overs for New Zealand, claimed a much crucial scalp of Carey to join the party. (SCORECARD)

Australia Cricket Team World Cup 2019 New Zealand vs Australia, Match 37 Cricket
Get the latest updates on IPL 2021, IPL Points Table , IPL Schedule 2021 , live score . Like us on Facebook or follow us on Twitter for more sports updates. You can also download the NDTV Cricket app for Android or iOS.