Half-centuries from Tatenda Taibu, Vusi Sibanda and Craig Ervine carried Zimbabwe past 300 and Kenya's chase never got off the ground. 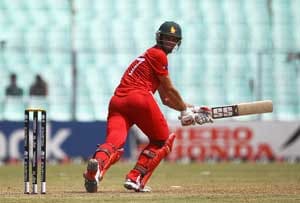 Zimbabwe's spinners completed the job started by their batsmen, sharing seven wickets as Kenya crumbled for 147 in pursuit of 308. This match was the last in the tournament for both teams, and with little but pride to play for Kenya captain Jimmy Kamande had urged his team to give Steve Tikolo, playing his final game for his country, a fitting send off.

It was not to be, however, as half-centuries from Tatenda Taibu, Vusi Sibanda and Craig Ervine carried Zimbabwe past 300 and Kenya's chase never got off the ground.

Chris Mpofu, the solitary specialist seamer in Zimbabwe's side, started Kenya's troubles by removing opener David Obuya in the very first over, and three overs later Collins Obuya's run out brought Tikolo to the crease for the final time in internationals. He got going with a couple of firm flicks to the deep midwicket boundary but then played back to Price and was struck in line with leg stump to be sent on his way. In a touching sign of respect to the retiring Tikolo, the Zimbabweans rushed in to shake his hand and he left the field, clearly emotional, to a standing ovation from both teams and the smattering of spectators around the ground.

Alex Obanda, who appeared to have adjusted to the conditions and had progressed easily into the 20s, lost partner Tanmay Mishra to a top-edged sweep and soon followed him back to the pavilion as an arm ball from Price struck pad before bat as he stretched forward to defend. It was spin that did for Thomas Odoyo too, Lamb ripping one past his defences as he played back in defence and a successful review by Zimbabwe securing the dismissal.

Kenya were in the dire position of 73 for 6 when he was removed, and slipped even further when Rakep Patel slog-swept straight to Regis Chakabva at deep midwicket for the seventh wicket. Their rapid slide was briefly halted by Nehemiah Odhiambo, who swung his way merrily to an unbeaten 44, but it was only a matter of time before the tail capitulated completely.

Zimbabwe's innings had been built around two fluent partnerships, Sibanda and Taibu adding 110 for the third wicket to help their team recover from a shaky start and lay a solid platform before Ervine and Chigumbura put on a rollicking 105 to boost the score out of Kenya's reach.

The batsmen initially struggled to impose themselves after Chigumbura's decision to bat first on a cracked, dry surface that got slower and lower as the afternoon wore on. Odhiambo, who impressed with his pace and bounce against Australia in Bangalore, was brought on in the ninth over and with his sixth delivery achieved the breakthrough, a length delivery on a perfect line kissing the edge of Chakabva's bat on the way through to wicketkeeper David Obuya. Taylor followed soon after, playing too early as the ball stopped on the wicket to spoon an easy catch to mid-on as Zimbabwe slipped to 36 for 2.

Taibu and Sibanda were generally cautious as they set about constructing a partnership after the early wickets, but while the batting surface was not conducive to stroke-making the outfield remained very fast and both batsmen were quick to seize on the bad ball. While Sibanda was more orthodox in his shots, Taibu was characteristically innovative, twice reverse-sweeping offspinner James Ngoche to the boundary.

Kenya wasted both of their reviews to contested lbw decisions in an effort to break the stand, but both Sibanda and Taibu barely offered a chance to the bowlers in the course of their partnership and Sibanda, in particular, soon began to take the attack to the bowlers. He reached a 54-ball half-century in the 28th over with an elegant loft over long-on but could have been run out immediately afterwards after a late decision from Taibu to turn a quick single down.

There had been several occasions of uncertainty in the running during the partnership, and one over later atrocious running finally cost Sibanda his wicket. Taibu was the man at fault, initially setting off before opting against the run, and with both batsmen at one end Sibanda didn't even bother to attempt to make it back to safety.

Zimbabwe's momentum barely dipped despite the wicket, however, and two overs later Taibu brought up his own fifty - and passed 3,000 runs in one-day internationals - with a scything cut to backward point. He paid the price for one cheeky reverse-sweep too many, trapped leg before for 53, but his dismissal brought Ervine and Chigumbura together for the decisive stand of the innings.

Once both had settled, they began to ping the boundary with ease and Ervine rushed to his fifty from just 46 balls in the midst of a Batting Powerplay that yielded 50 runs and the wicket of Chigumbura - caught at long-on for a rapid 38. With 300 in sight, Ervine chopped a drive onto his own stumps but Lamb and Utseya continued the charge in fine style.

Zimbabwe wanted more from their World Cup campaign, but their resounding wins over Canada and Kenya will at least lend credence to their claim that they're too good to be lumped with the Associates as they look forward to a return to Test cricket. The end of Kenya's trip to India also marks something of a new beginning for them, and without Tikolo in their middle order it is now up to a clutch of promising youngsters to rebuild for what is, hopefully, a brighter future.

Comments
Topics mentioned in this article
Cricket Craig Ervine West Indies Cricket Team Netherlands Zimbabwe Cricket Team World Cup 2011 Kenya Vusi Sibanda
Get the latest updates on ICC T20 Worldcup 2022 and CWG 2022 check out the Schedule, Live Score and Medals Tally. Like us on Facebook or follow us on Twitter for more sports updates. You can also download the NDTV Cricket app for Android or iOS.