Zimbabwe captain Elton Chigumbura singled out poor batting as the reason for his team's first round exit in the World Cup. 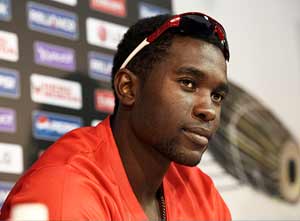 Zimbabwe captain Elton Chigumbura singled out poor batting as the reason for his team's first round exit in the World Cup.

Zimbabwe, who play their last group match against Kenya on March 20 in Kolkata, were sent packing following a seven-wicket defeat against Pakistan on Monday.

"Throughout the tournament we have fielded well and bowled superbly, but it can't be said about our batting. It was a big problem."

Zimbabwe have managed only one total of more than 200 during the tournament, hitting 298 in their only win so far, against Canada. They are fifth in the seven-team Group A with two points from five matches.

"We batted first (against Pakistan) because in the games here before teams who batted first put big scores on the board but unfortunately we lost four quick wickets before rain came and in the end when we wanted to finish well rain again came," said Chigumbura.

Zimbabwe lost their top four batsmen in Pallekele for just 43 runs before Craig Ervine (52) and Chigumbura (32 not out) lifted them to 151-7 when rain curtailed their innings after 39.4 overs.

Pakistan, set a revised target of 162 in 38 overs, chased down the target with the help of an unbeaten 78 from Asad Shafiq and 49 from Mohammad Hafeez.

"Unfortunately that happened in the game before, and the game before and everybody in the dressing room, particularly the batters, are unhappy about the way things are," said Butcher.

"All the batsmen worked hard for this World Cup. None of our players tried to give their wickets away, they are all working hard and trying to improve. Everyone is disappointed because we prepared well but couldn't deliver," said Butcher.

Comments
Topics mentioned in this article
Zimbabwe Cricket Team Ricky Ponting Canada Cricket Team Cricket Shahid Afridi Pakistan Cricket Team Australia Cricket Team World Cup 2011
Get the latest updates on India vs South Africa and check out  Schedule, Results and Live Score. Like us on Facebook or follow us on Twitter for more sports updates. You can also download the NDTV Cricket app for Android or iOS.