Yuvi has matured into a utility cricketer, says father Yograj

Yuvraj Singh is now a "utility cricketer" who can craft his innings as per the situation, feels his father and mentor Yograj Singh. 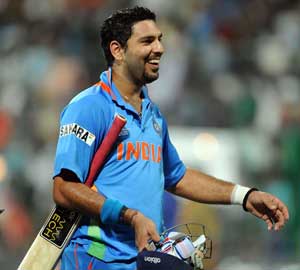 Yuvraj Singh is now a "utility cricketer" who can craft his innings as per the situation, feels his father and mentor Yograj Singh.

Hailing his son for a brilliant overall performance, which saw India run home with a five wicket win over spirited Ireland on Sunday said, "He (Yuvraj) has matured into a very good utility cricketer and I see that as a great change in him."

The 29-year-old etched his name into the record books after becoming the first player in the history of World Cup to take five wickets and score a half century in the same match.

On the superb bowling effort of his son, Yograj said, "I have been working with him for long now and keep having discussion with Bishen Singh Bedi. I think what the world does not probably realise is that Yuvraj has worked so hard all these years."

The mercurial left-hander who is known for some big hitting struck a patient 75 ball unbeaten 50 with just three hits to the fence after claiming five wickets for just 31 runs to restrict Ireland to a total of 207 on a wicket that seemed to be conducive to spin bowling.

Witnessing the change in Yuvraj's batting his father, a former Test cricketer said, "In games, where we are chasing modest scores like the one against Ireland, there is no need to hit 90m and 100m sixes. He finished the game and that was important."

Emphasising upon Yuvraj's recent spate with the injuries Yograj said, "From ligament to wrist injury, any cricketer in his place would have struggled. But he is mentally so tough that he has put these odds behind and faced the challenges head on."

Yograj feels that Yuvraj has the habit of "gifting his wicket" to the bowler rather than getting out to good deliveries.

Comments
Topics mentioned in this article
World Cup 2011 Yuvraj Singh Anil Kumble Gary Kirsten Bhagsingh Bhundel Yograj Singh Cricket
Get the latest updates on ICC T20 Worldcup 2022 and CWG 2022 check out the Schedule, Live Score and Medals Tally. Like us on Facebook or follow us on Twitter for more sports updates. You can also download the NDTV Cricket app for Android or iOS.