World Cup not over for England, says Strauss

England captain Andrew Strauss insists his team can still win the World Cup despite a roller-coaster ride that has left them facing elimination. 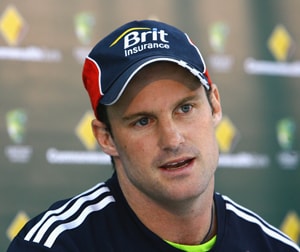 England captain Andrew Strauss insists his team can still win the World Cup despite a roller-coaster ride that has left them facing elimination.

England's loss to Bangladesh on Friday, when the ninth-wicket pair of Mohammad Mahmudullah and Shafiul Islam put on 58 runs to snatch an improbable win, was symbolic of their tournament so far.

The inconsistent England have lost to non-Test nation Ireland and now Bangladesh, secured a thrilling tie against India and won against the Netherlands and mighty South Africa.

England, with five points from as many matches, must beat the West Indies in their last league match in Chennai on Thursday to maintain their hopes of making the quarter-finals.

Strauss, when asked after the heart-breaking loss to Banagladesh if England could still win the tournament, said all was not lost yet.

"World Cups are funny things," he said. "You can gain confidence just at the right moment, and get in a real run of form just when you need it.

"We still haven't had a game where our batting and bowling fire at the same time, but we need to do it in that last game against the West Indies.

"Clearly we need consistency from now on if we want to progress in the tournament."

England were shot out for 225 on a sluggish wicket by Bangladesh despite half-centuries from Jonathan Trott (67) and Eoin Morgan, who hit a fluent 63 after flying in to replace Kevin Pietersen.

The duo put on 109 for the fourth wicket to lift England to 162-3 in the 39th over, before the last seven wickets crashed for 63 runs.

England then reduced Bangladesh to 169-8 before Mahmudullah and Shafiul turned the tables with their match-winning partnership in front of 18,000 jubliant home fans.

Strauss pinned the defeat on the late evening dew at the Zahur Ahmed Chowdhury stadium, that made it difficult for bowlers to grip the ball.

After star off-spinner Graeme Swann flew into a rage over the wet ball, the England captain questioned the decision to hold a World Cup match under lights at the venue.

"It seems slightly strange to have the first ever day-nighter at a certain ground in a World Cup," he said.

"There was a 20-over period when the dew was very, very bad. Swann could not grip the ball at all and I think there's something not quite right if a spinner can't grip the ball.

"Especially in this part of the world, where spin plays such an important role."

Strauss defended Swann's on-field swearing, which forced one television commentator to apologise on air for the language used.

"Graeme was obviously very frustrated, because the dew meant he could not grip the ball," the captain said.

"He felt he had a big role to play in the game. It was frustrating for him, and all of us, that the ball got as wet as it did. I told Graeme to calm down and get on with it - and he did do so."

Strauss said losing the toss, which meant England had to bowl under lights, played a pivotal role.

"We felt 225 was a par score, that we could defend it, and we got ourselves in a great position to do that," he said.

"But in the end we weren't able to take those last two wickets, which is desperately disappointing for us."

Comments
Topics mentioned in this article
World Cup 2011 Andrew Strauss Bangladesh Cricket Team England Cricket Team Australia Cricket Team West Indies Cricket Team Cricket
Get the latest updates on ICC T20 Worldcup 2022 and CWG 2022 check out the Schedule, Live Score and Medals Tally. Like us on Facebook or follow us on Twitter for more sports updates. You can also download the NDTV Cricket app for Android or iOS.