India's win against the West Indies on Sunday has put Dhoni's men firmly in the path of Australia's quest for World Cup glory for the fourth consecutive time. 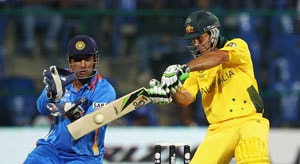 India's win against the West Indies on Sunday has put Dhoni's men firmly in the path of Australia's quest for World Cup glory for the fourth consecutive time.

The match will take place in Ahmedabad on Thursday and though Australia suffered their first loss in 34 World Cup game against Pakistan, Ponting's men will look to bounce back with vengeance. While the match itself means that one of the two giants will be knocked out of contention, India too will hope to blunt a challenge that many believe is not as strong as it was in the previous three editions of this tournament.

West Indies finish the league stage on the fourth spot in Pool B and will take on Pool A toppers in Pakistan. The match will take place in Mirpur on Wednesday and Afridi's men look set to continue their good form in the tournament. Skipper Darren Sammy though expects his team to put a better performance with the bat than what it did against India at Chennai.

The other teams which have qualified for the knockout stage are Sri Lanka, England, New Zealand and South Africa. While the Proteas will take on the Kiwis at Mirpur on Friday, Sri Lanka will look to make the most of home conditions when they take on England at Colombo in the final match of the quarter final round, on Saturday.

Comments
Topics mentioned in this article
India Cricket Team Australia Cricket Team Tamim Iqbal West Indies Cricket Team Cricket Bangladesh Cricket Team World Cup 2011
Get the latest updates on ICC T20 Worldcup 2022 and CWG 2022 check out the Schedule, Live Score and Medals Tally. Like us on Facebook or follow us on Twitter for more sports updates. You can also download the NDTV Cricket app for Android or iOS.