Windies get triple boost ahead of Pakistan clash

Chris Gayle, Kemar Roach and Shivnarine Chanderpaul are all set to return for West Indies' quarter-final clash against Pakistan in Dhaka. 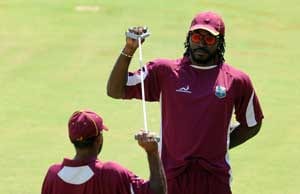 Chris Gayle, Kemar Roach and Shivnarine Chanderpaul are all set to return for West Indies' quarter-final clash against Pakistan in Dhaka. Gayle has recovered from an abdominal strain, Roach is healthy after a mild infection and Chanderpaul may be given an opportunity to show that he is over his patch of poor form.

Gayle sustained the injury after West Indies' third group-stage match against Bangladesh in Dhaka, two and half weeks ago, and missed out on the Ireland clash in Mohali as a result of that. He returned against England, where he scored a flashy 43 off 21 balls, but then was ruled out of the match against India three days later.

Darren Sammy, the West Indies captain, said Gayle should be fit to open the batting in the quarter-final. "He batted in the nets and I liked the way he was hitting the ball and moving his feet," Sammy said at the Shere-e-Bangla stadium. Although Gayle was seen lagging behind some of the others during the warm-up drills, Sammy said the big-hitting opener will play through pain if he has to. "I know Chris is a very committed fellow, he will do whatever it takes to put the team in a position to win."

Roach's concern was not as serious and he has made a full recovery. He bowled in the nets on Tuesday. If Roach returns, it will probably be at the expense of Ravi Rampaul, who took 5 for 51 against India. It presents West Indies with quite a selection dilemma but one they will not be unhappy to have. "Ravi had an excellent start for us in his first game. I know we will come up with the best combination to go out and win us the quarter-finals," Sammy said.

The most surprising of the recalls is Chanderpaul's, who played in the first four group matches and scored 70 runs in three innings. Chanderpaul has not managed a half-century this year, in six ODIs, and last scored more than 50 against South Africa nine months ago. His experience means that he can't be on the sidelines for too long and Sammy indicated that his return is imminent. "He is part of the team, he has a big role to play and most likely we will see him feature in tomorrow's game."

Making room for Chanderpaul may prove tricky. One of Andre Russell or Devendra Bishoo may find themselves benched. They may also make a radical change and drop Devon Thomas, who has scored just 41 runs in six matches, and give the wicket-keeping responsibilities to Darren Bravo.