Wimbledon 2012: Leander Paes-Vesnina through to the quarter-final 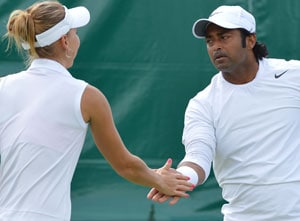 They defeated Max Mirnyi and Victoria Azarenka 7-6, 6-3 in the round 3.

Azarenka played her women's singles semi-final against Serena Williams earlier in the day which she lost in straight sets. The fatigue factor might have hampered the Belarusian as the pair went down to Paes-Vesnina in straight sets.

With a huge percentage of first serves, Leander and partner Vesnina had the upperhand in the match.

Although the first set went into a tie-breaker, the Indo-Russian pair managed to hang on. From then on, the Indian number 1 and Vesnina had a firm grip on the match.

They now face Aussie-Russian pair of Paul Hanley and Alla Kudryavtseva in the quarter-final.