Will take a call on Johnston on Friday: Porterfield

Ireland captain William Porterfield on Thursday said they would take a call on Friday on whether to play injured bowler Trent Johnston in their crucial Group B match against the West Indies. 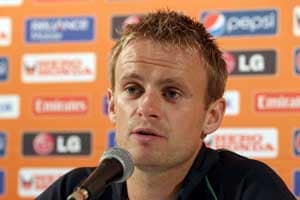 Ireland captain William Porterfield on Thursday said they would take a call on Friday on whether to play injured bowler Trent Johnston in their crucial Group B match against the West Indies.

"We will assess his fitness again tomorrow and take a call on him on the morning of the match," said Porterfield after Johnston bowled a couple of overs during the team's practice session here.

Johnston had suffered a knee injury after taking two wickets in the match against India at Bangalore on Sunday and was forced to go off the field.

Hinting that Ireland are keen to include him in the playing XI to strengthen their bowling attack to stay in contention for qualifying to the next stage, Porterfield also said that Johnston ran in hard during the practice session and looked keen to play Friday's match.

With just one win from three games, tomorrow's match against the Windies would be an important one and the Irish captain said his team is looking to win at least two of the remaining three group matches.

Ireland had sprung a surprise when they chased down a mammoth target of 328 against England in a World Cup match. Porterfield said his team had played against the Windies about two years back and rated them as great competitors, but are looking forward to go all out against them. "We are treating it as a must-win game," said Porterfield.

"We've played good cricket to this point and we've done our homework on the West Indies so we're looking forward to the game."

Rating Ireland's fielding as one of their strengths, Porterfield said, "If we can play the way we have played in the last three games, we hope to do well tomorrow as well." Porterfield also said that spin, which was being used as an option by some teams to open the attack, would definitely remain an option with them as well.

Comments
Topics mentioned in this article
William Porterfield Cricket Ramnaresh Sarwan Ireland Cricket Team Trent Johnston Punjab Cricket Association Stadium, Mohali World Cup 2011
Get the latest updates on ICC T20 Worldcup 2022 and CWG 2022 check out the Schedule, Live Score and Medals Tally. Like us on Facebook or follow us on Twitter for more sports updates. You can also download the NDTV Cricket app for Android or iOS.