Will Pankaj Kumar's bat do it for India?

Both Master Blaster Sachin Tendulkar and the mercurial Harbhajan Singh will be wielding willows designed by the man from Jalandhar. 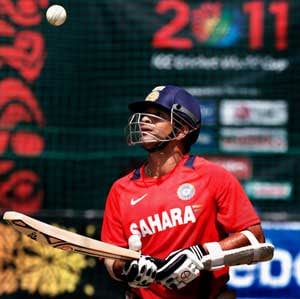 Both Master Blaster Sachin Tendulkar and the mercurial Harbhajan Singh will be wielding willows designed by the man from Jalandhar.

When you see Sachin and Bhajji walk onto the pitch on Wednesday, you'll see something different about them. Their willows are new, unused, and well, exclusively here for your preview.

At around 1.30pm on Monday, Pankaj Kumar, a Jalandhar-based bat manufacturer, walked straight into Tendulkar's suite at the Taj Hotel in Chandigarh, and presented to him what he calls the "super bat". The other he had brought along went out as a gift to Harbhajan.

"I prepared the bat for the master blaster on special request. When India was playing West Indies in Chennai on March 19 at the MA Chidambaram stadium (the 42nd match - the last in the group stage of the World Cup), Sehwag had requested me to make a fresh bat for him and Sachin."

"I had then couriered the willows to him. Later, Sachin SMSed me, asking for a heavier bat. Even Bhajji expressed a desire to have a new one, so there wish had to be my command - it is a big match at hand and I do hope these tools help them win the war," said Kumar, ecstatic about getting a chance to serve the big boys before the make-or-break encounter.

The businessman says that he got to the job immediately after, and decided to deliver the bats by hand if the team made it to Mohali. "Sachin never discloses details about the bat he'd be wielding for a particular match, but we come to know when it's on the field. He broke Gavaskar's record of 34 Test centuries with a bat produced by us, and also scored 10,000 runs from that one. After both the matches, he messaged me saying that he loved the Super Bat," he said.

Speculation was rife that Sachin had planned to switch his lucky battered willow with a fresh one for D-Day, and even though the cricketers have their lips pursed on the matter, the pictures say it all. "Sachin's 100th century will be hit from his bat. He even asked me to come in the evening and take back the old bat for repair," said Kumar.

When asked how he first got associated with the Men in Blue, he said, "I was introduced to Sachin by Sehwag 7-8 years back during a match in Delhi. From then on, he has been calling me at regular intervals for bats. Bhajji, I met at Mohali sometime back."

Tendulkar has scored over 1000 runs in a calendar year in ODIs 7 times, and in 1998 he scored 1894 runs, easily the record for the highest number of runs scored by any player in a single calendar year for one day internationals. Tendulkar is also one of the very few players who are still playing in international cricket from the 1980s.

* Sachin's bat generally weighs 1270 gm. Other batsmen use bats weighing around 1200 gm.
* Preparing Sachin's bat generally takes around 10-15 days. It takes 5000-6000 cleft wood units, imported from UK, to decide upon which one will make for the best raw material
* A team of around 40-45 workers get to the job once the selection stage is over.
* First, they mallet (hammer the bat with a wooden hammer) and then knock it off an old ball.
* While Sachin's was auctioned at a whopping Rs 42 lakh last year, the manufacturer of his semi-final bat, Kumar says that he gives the players these bats free of cost. "We don't charge a single penny - it's for the country," he said.

Comments
Topics mentioned in this article
New Zealand Cricket Team India Cricket Team Pakistan Cricket Team Sachin Ramesh Tendulkar Cricket Pankaj Kumar World Cup 2011 Harbhajan Singh
Get the latest updates on ICC T20 Worldcup 2022 and CWG 2022 check out the Schedule, Live Score and Medals Tally. Like us on Facebook or follow us on Twitter for more sports updates. You can also download the NDTV Cricket app for Android or iOS.