With World Cup just about round the corner, I suddenly realised I wouldn't have been in this profession had I not fallen in love with this game seven years back. 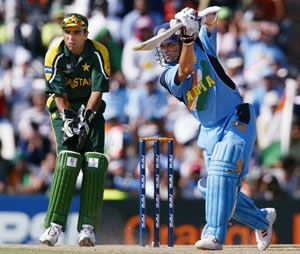 It was year 2003 when the cricket bug officially bit me. Worse, it happened during my board examinations (Class 12th). The 2003 ICC World Cup, where India marched into the final, ignited the love that I had for this game, just that I did not realise it.

So before the 2011 World Cup starts and we get into the statistical analysis, figuring out the equations and predispositions of each team and player, I just want to reminisce the time when the sheer love for the game drove me in. Needless to say, India's performance in the South African edition added fuel to the fire!

Coming from a family where watching cricket was considered a complete waste of time and hence was prohibited, it was kind of a shock to me as well as my family. Though I used to occasionally watch matches if they were played between India and Pakistan. But watching it for 8 hours was unimaginable. So it was more like checking scores intermittently and then if the game was going India's way, watch the death overs.

During the 2003 World Cup, every India match was more or less a day before my exams. So it would be me watching the match the whole day, books wide open on my lap and waiting to be read, and then be up all night soaked in the euphoria of India's win, trying to mug up the entire syllabus.

And then came the mother of all matches - India vs Pakistan on March 1. That my family joined in, came as a surprise. Of course it was more because of the 'P' factor. My dad, who cannot make out a no-ball from a wide ball and a Yuvraj from a Sehwag, kept hurling his 'what', 'who' and 'why' questions at me and I, trying to be an expert, tried to answer them all. Now, I know I answered some of them incorrectly :). He, however, could have given all passionate followers a tough competition as he prayed hard for Saeed Anwar's dismissal. My enthusiasm took a blow when Wasim Akram's last over blitz took their score to 273. For once I thought of going back to my books. But I remembered what Sachin Tendulkar had said to a newspaper a day before in reply to Shoaib Akhtar's loudmouth warning: "I would let my bat do the talking." So he did. In fact he roared India to a thumping win and we all went hysterical like all Indian fans.

When India lost in the final against Australia, my family's interest in the game ended. Even I cursed myself for wasting my entire day as I had two back-to-back exams and I was heartbroken and underprepared. But the agony and anger did not last long. I had found my love. A month later I was back following the game, not only as a fan, but also as a learner. As they say, you need to understand the art to appreciate a piece of it. Since then, it has been a new lesson everyday and journey so far has been incredible and eventful.

PS: Just a small wish - May Dhoni and Co take it over from where Ganguly and his men left in 2003 and win the World Cup. Amen! (Chorus)