West Indies captain Darren Sammy said on Thursday the dramatic Dhaka stoning of their team bus, and the bitter war of words which followed, has strengthened the squad's World Cup bonds. 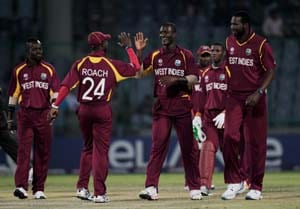 West Indies captain Darren Sammy said on Thursday the dramatic Dhaka stoning of their team bus, and the bitter war of words which followed, has strengthened the squad's World Cup bonds.

West Indies were attacked by angry Bangladesh fans after Sammy's side had bowled out the home team for just 58 on their way to a nine-wicket rout.

Team bosses then dismissed as "ridiculous" claims by International Cricket Council chief Haroon Lorgat that the incident had been minor and that just "a few pebbles" had been hurled at the bus as it left the stadium.

"The one good thing about West Indies as a team is that we have a lot of camaraderie. We always fight together. Now we are a long, long away from home so we are each other's family," said Sammy.

"The last few days there have been ups and downs but we have stuck together as a team. We have been managing it quite well so far. We are here to play cricket and the higher administration is there to handle the distractions.

"It (the stoning) is behind us. It was quite an unfortunate thing to happen but we are over that and the guys are geared up to face Ireland tomorrow."

Friday's match could go a long way in helping the West Indies into the quarter-finals after winning two of their matches so far while going down in their opener by seven wickets to South Africa.

The West Indies are placed third in Group B and a victory over Ireland will give them a degree of security ahead of potentially tougher matches against England and India.

"We played against Ireland in the Jamaica festival in 2010 and we had the better result," said Sammy.

"I know a quite a few of their guys as well. Obviously it's a team that is constantly improving and it shows their cricket is moving forward.

"We must go out there and stick to our strengths and apply pressure on them. We have never taken them for granted and we are definitely not taking them lightly this time.

"We have seen what they are capable of doing and we are prepared for the challenge."

Sammy said the team were keen to leave a mark at cricket's showpiece tournament.

"We are aware what cricket means to the Caribbean people. But slowly we are getting on board. We know how prestigious this tournament is and we are going to take it step by step.

"Ups and downs are a constant reminder to us as to what we need to do in the field. They act as a motivation and inspiration to make the team perform."

Comments
Topics mentioned in this article
Bangladesh Cricket Team Gary Kirsten Ravi Rampaul MS Dhoni Darren Sammy World Cup 2011 Cricket
Get the latest updates on India vs South Africa and check out  Schedule, Results and Live Score. Like us on Facebook or follow us on Twitter for more sports updates. You can also download the NDTV Cricket app for Android or iOS.