It's all too familiar for the Black Caps. Yet another World Cup semi final, a mighty opponent in Sri Lanka, and the odds, justifiably, stacked heavily against them. 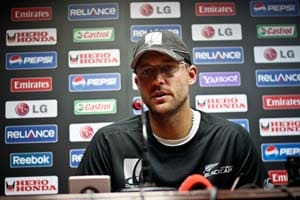 It's all too familiar for the Black Caps. Yet another World Cup semi final, a mighty opponent in Sri Lanka, and the odds, justifiably, stacked heavily against them.

History will repeat itself unless Daniel Vettori's men string together the best 100 overs of cricket they have ever played.

If New Zealand brought their A-game to South Africa, they'd need to add a few plusses to succeed here at the Premadasa Stadium in Tuesday's semi final.

New Zealand's skipper said: "I get a little upset that everyone keeps talking about our record of making six semi finals and not going any further. In the Champions Trophy we went one step further and made the final against Australia," Vettori, who will step down as captain after the World Cup, said.

"We can look back on that and hope it's a starting point for us going past the semis. It doesn't matter what others have to say. I know that every individual in the side is ready to deliver."

Vettori took potshots at the organisers for allowing Sri Lanka to reuse the pitch that was used for their quarter final on Saturday.

"We have been told that we are playing on the same surface that was used in the game against England, which is very surprising. We would have thought it would be mandatory to prepare a fresh wicket for a World Cup semi final. But obviously not," he said.

Comments
Topics mentioned in this article
Cricket World Cup 2011
Get the latest updates on India vs South Africa and check out  Schedule, Results and Live Score. Like us on Facebook or follow us on Twitter for more sports updates. You can also download the NDTV Cricket app for Android or iOS.