Virender Sehwag has been ruled out of India's final Group B match against the West Indies on Sunday. 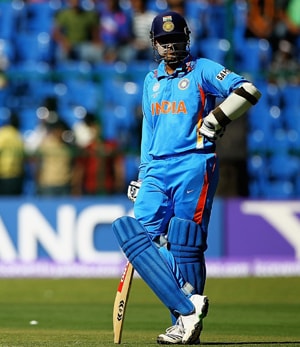 mashing opener Virender Sehwag has been ruled out of India's final Group B match against the West Indies on Sunday. This comes after a press conference on Saturday, in which skipper Mahendra Singh Dhoni had said that the final decision on Virender Sehwag was yet to be made.

"Viru (Sehwag) has got an allergic reaction in his right knee, so we will take that call (about whether to play him) either in the evening or on the morning of the game," said India captain Mahendra Singh Dhoni.

Dhoni was speaking before South Africa completed a crushing 206-run win over Bangladesh in Dhaka on Saturday that assured India of a quarter-final spot, regardless of their result against the West Indies.

Test opener Gautam Gambhir would most likely partner Sachin Tendulkar at the top of the order which also means that Suresh Raina is likely to get a chance to feature in the Indian team.

Comments
Topics mentioned in this article
MS Dhoni Gary Kirsten Ravi Rampaul Bangladesh Cricket Team World Cup 2011 Virender Sehwag Cricket
Get the latest updates on ICC T20 Worldcup 2022 and CWG 2022 check out the Schedule, Live Score and Medals Tally. Like us on Facebook or follow us on Twitter for more sports updates. You can also download the NDTV Cricket app for Android or iOS.