Virender Sehwag said on Tuesday that only Sachin Tendulkar deserved the 'Century of Centuries' and felt confident that the batting maestro would reach the milestone in the World Cup quarter-final against Australia in Ahmedabad on Thursday. 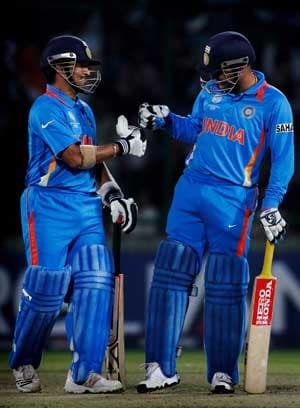 Virender Sehwag said on Tuesday that only Sachin Tendulkar deserved the 'Century of Centuries' and felt confident that the batting maestro would reach the milestone in the World Cup quarter-final against Australia in Ahmedabad on Thursday.

"I hope he gets it. Only Sachin deserves the record," Sehwag told MiD DAY after the team's practice session at the Sardar Patel Stadium in Motera on Wednesday.

"I once told him to go for 100 international hundreds. It is a difficult thing to do. Had it been easy, anybody would have done it.

"I think the second best is around 60 (centuries). It requires a lot of hard work to score one century," Sehwag said.

The record books are in favour of Tendulkar, who has scored nine out of his 48 ODI hundreds against Australia, the most against any opposition.

The Little Master couldn't have asked for a more apt venue. For, although he has scored just one century in the four one-dayers he has played here, this is where he struck his maiden Test double ton.

This is also the ground where legends Kapil Dev and Sunil Gavaskar achieved their respective landmarks.

Kapil broke Richard Hadlee's record to become the highest wicket-taker in Tests, while Gavaskar became the first batsman to score 10,000 runs in the longer format.

Dhiraj Parsana, former India cricketer and Motera curator, witnessed both those records. He urged Tendulkar to go for his 100th ton here.

"We couldn't have asked for a better occasion than this. His century will help India qualify for the semis," Parsana told MiD DAY.

"The wicket will assist the batsmen, so I am confident that he will do well. We are all eager to see him achieve it."

Comments
Topics mentioned in this article
Sachin Ramesh Tendulkar World Cup 2011 Donald George Bradman Virender Sehwag Cricket
Get the latest updates on ICC T20 Worldcup 2022 and CWG 2022 check out the Schedule, Live Score and Medals Tally. Like us on Facebook or follow us on Twitter for more sports updates. You can also download the NDTV Cricket app for Android or iOS.