Vettori, Mills on track to return for New Zealand 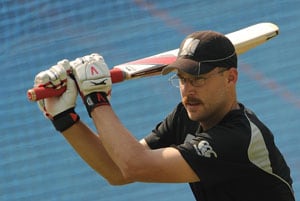 New Zealand skipper Vettori missed the last two group games after an injuring on his knee in the 110-run win over Pakistan, while pace bowler Mills sat out the loss to Sri Lanka with a thigh strain.

A New Zealand team spokesman says both players are continuing to recover well and should add to the line-up on Friday against South Africa.

New Zealand hasn't played since Friday's loss to Sri Lanka in Mumbai and didn't find out until Sunday where its quarterfinal would be played.

The squad arrived in Dhaka at midday local time on Tuesday and decided not to hold a daily practice session.

As well as being a key bowler for his side, Vettori adds experience to the Black Caps' batting line-up, which was missed as they slumped to 153 all out against Sri Lanka.

"We need to show more application to stay at the wicket," coach John Wright was quoted as saying. "We've got the shot making but we have to have the application to take the game deep.

Vettori plans to quit as ODI captain after the World Cup.

New Zealand doesn't have happy recent memories of playing in Bangladesh either, having lost a series 4-0 here last year, but wicketkeeper Brendon McCullum thinks that could work in the team's favor against South Africa.

"It's a real positive for us," McCullum said. "We have some good knowledge about the conditions in Dhaka and it will help us playing against South Africa in those conditions.

"They would probably have wanted some pace and bounce in the wicket, but they won't get that. It is not a bad draw for us at all."

Comments
Topics mentioned in this article
South Africa Cricket Team World Cup 2011 Pakistan Cricket Team Daniel Vettori Kyle Mills New Zealand Cricket Team Cricket
Get the latest updates on ICC T20 Worldcup 2022 and CWG 2022 check out the Schedule, Live Score and Medals Tally. Like us on Facebook or follow us on Twitter for more sports updates. You can also download the NDTV Cricket app for Android or iOS.