Veteran Kenyan vows to bounce back

Veteran batsman Steve Tikolo vowed on Tuesday that Kenya would lift themselves for their second World Cup match against Pakistan after their mauling at the hands of New Zealand. 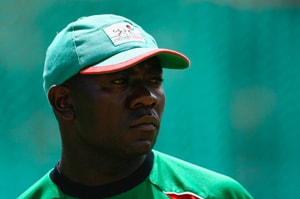 Veteran batsman Steve Tikolo vowed on Tuesday that Kenya would lift themselves for their second World Cup match against Pakistan after their mauling at the hands of New Zealand.

Kenya were skittled out for just 69 -- their lowest World Cup score and the fifth worst in tournament history -- in Nagpur on Sunday in a match that was over in just 31.5 overs.

Tikolo said professionals should know how to lift themselves after a big disappointment.

"As a top professional, for me if you are down it's the way you pick yourself up, and obviously we can pick ourselves up for the game on Wednesday," said Tikolo, dismissed for just two during a miserable batting display.

"We lost the game. It wasn't a good day for us but the good thing that came out in the changing room was that the boys were very disappointed and that shows the mark of good professionals," he said.

Tikolo, who made his ODI debut in 1996, said the current team needed time to settle.

"We are a good side, a mixture of experience and youth, some of whom have never been to the World Cup before, so this set of players have been together for a short while," he said.

Not far off his 40th birthday, Tikolo is the second oldest player at the tournament behind 40-year-old Canadian John Davison.

"If you look at the past World Cups, the teams that we had in those tournaments had played together since 1996 up to 2003, so they were teams that had gelled well, but this team is new," said Tikolo.

He said internal problems in Kenyan cricket had affected the team, which upset the West Indies at the 1996 World Cup and went all the way to the semi-finals in 2003.

"We did well in 2003, but we had our own internal problems. Obviously things could have been handled better management-wise but right now I don't really want to dwell on that, I just want to look at this World Cup and move on," said Tikolo.

Tikolo, who said captain Jimmy Kamande was fine after being hit in the nets, said the Kenyan team could improve with more opportunities.

"If you give the example of Sri Lanka, they were not a top side in the world but once they got opportunities, we see what cricket they are playing right now, so we too need more opportunities," said Tikolo.

But he admitted Pakistan would be tough to beat in Hambantota, Sri Lanka.

"We know Pakistan are here to play good cricket and will be competitive and it's good to hear that the opposing captain has respect for us. I will pass that message to the boys so obviously the guys will be pumped up," said Tikolo.

The Kenyan said his team were not focused on the possibility of missing out on the next World Cup, after international cricket chiefs opted to trim the event to just ten nations from the current 14.

"We have put that on the back burner. We don't want to dwell on that right now, and think about Wednesday's game only," said Tikolo.

Comments
Topics mentioned in this article
West Indies Cricket Team Kenya Netherlands Steve Tikolo World Cup 2011 Cricket
Get the latest updates on ICC T20 Worldcup 2022 and CWG 2022 check out the Schedule, Live Score and Medals Tally. Like us on Facebook or follow us on Twitter for more sports updates. You can also download the NDTV Cricket app for Android or iOS.