The Vidarbha Cricket Association, host of the World Cup match between India and South Africa, apologised for the inconvenience caused to cricket fans during ticket sales on Tuesday. 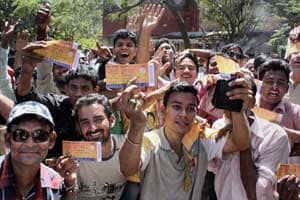 The Vidarbha Cricket Association, host of the World Cup match between India and South Africa, apologised for the inconvenience caused to cricket fans during ticket sales on Tuesday.

"We are extremely sorry for inconveniences to cricket fans who had turned up in large numbers for the lower denominations tickets," VCA president Sudhir Dabir told reporters here. "We had made adequate arrangements for the smooth ticket sale but the situation went beyond our expectations," he said.

Denying reports of 'cane charge' by police, Dabir said all the arrangements for the ticket sale were made as per guidelines of top police officials. "Policemen, besides private security company guards and volunteers and bouncers were also deployed," he said, adding that about 15,000 tickets of East and West stand of Rs 300 and Rs 600 denomination were sold out completely.

When counters for sale of tickets to the general public opened here, there was a mad rush and some fans broke barriers and compound wall to reach the counters, resulting in a melee, the police said.

Comments
Topics mentioned in this article
World Cup 2011 Vidarbha Cricket Association Ground, Nagpur Cricket
Get the latest updates on ICC T20 Worldcup 2022 and CWG 2022 check out the Schedule, Live Score and Medals Tally. Like us on Facebook or follow us on Twitter for more sports updates. You can also download the NDTV Cricket app for Android or iOS.