Victorious Indian captain Mahendra Singh Dhoni said Ireland had given his team a tough battle in their World Cup clash on Sunday but was pleased his middle-order batsmen had time in the middle. 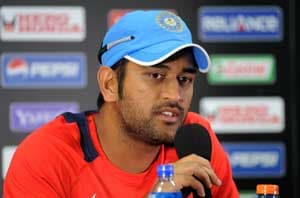 Victorious Indian captain Mahendra Singh Dhoni said Ireland had given his team a tough battle in their World Cup clash on Sunday but was pleased his middle-order batsmen had time in the middle.

Ireland were all out for 207 in 47.5 overs with skipper William Porterfield top-scoring with 75 and Niall O'Brien hitting 46. The star bowler for India was Yuvraj Singh, who took five for 31.

Virender Sehwag and Gautam Gambhir were out cheaply in India's reply and the home side were later reduced to 100-4 but an unbeaten 50 from Yuvraj helped take the team home with four overs to spare.

"I think the Ireland team did really well and I think their bowlers were well supported by the fielding side," said Dhoni.

"I think the most important thing is that everyone got a chance to bat. We were batting under pressure," he added, saying it was good for players lower down the order such as number seven Yusuf Pathan to spend time in the middle.

"We are showing signs of improvement, which is good. I feel it's important to peak at the right time because it's a long tournament so definitely what we have seen is slow and gradual improvement on the bowling side," he said.

"Our exceptional fielders can get better but our slow fielders will remain the same," he added.

Ireland captain William Porterfield said his side had let a good position slip but he was proud of the team, who sensationally beat England in their previous match.

"I think we got ourselves into a great position after losing two early wickets and (were) just unfortunate (with) the run-out of Niall O'Brien that set us back slightly and then we came back into the game again," he said.

"We did well. We're fighting well and we fought right until the end. An extra 40 runs could have been interesting," he added.

Porterfield said Ireland were still confident of qualifying for the quarter-finals as one of the top four sides in Group B.

"We've got three games left and there's no reason we can't beat any of the three teams we're playing," he said, adding: "We've just got to get ourselves back up on the horse."

Ireland's remaining fixtures are against West Indies, South Africa and the Netherlands.

Comments
Topics mentioned in this article
MS Dhoni Yuvraj Singh Suresh Raina Ireland Cricket Team World Cup 2011 India Cricket Team Cricket
Get the latest updates on ICC T20 Worldcup 2022 and CWG 2022 check out the Schedule, Live Score and Medals Tally. Like us on Facebook or follow us on Twitter for more sports updates. You can also download the NDTV Cricket app for Android or iOS.