India's dislike for the controversial Umpire Decision Referral System (UDRS) was never a secret and Yuvraj Singh is the latest player from the side to put a question mark over the technology, calling it "confusing". 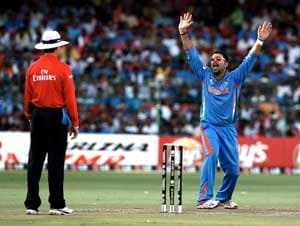 India's dislike for the controversial Umpire Decision Referral System (UDRS) was never a secret and Yuvraj Singh is the latest player from the side to put a question mark over the technology, calling it "confusing".

"It's a bit confusing. I don't know, don't understand it much," Yuvraj said after leading India to a five-wicket win over Ireland in their World Cup match here last night.

The DRS, which has come under constant scrutiny in the ongoing tournament, on Sunday again came into focus when on-field umpire Rod Tucker gave Ireland's Alex Cusack out even though the point of impact of the ball on the pad was more than 2.5 metres from stumps.

The umpire ruled Cusack not out off Yuvraj in the 44th over but after an appeal by India, he reversed his decision and gave the batsman out though TV replays showed the point of impact at the pad would have been more than 2.5 meters from the stumps.

Yuvraj starred with the ball too picking up five wickets. "The feeling was like when I scored my first century. For a part-time bowler, I am very happy to have picked up five wickets. Can't ask for more. I am trying very hard, I am much fitter. I always want to do well for India, and don't want to look back. Last two games, I scored two fifties," he said.

The specialist India spinner Harbhajan Singh fared poorly but Yuvraj defended his teammates. "Everyday can't be your day. They have all been performing well and Bhajji has been a world class bowler for many years. Taking wickets don't mean I will overshadow Bhajji. There was a time when Bhajji was scoring centuries."

Despite his good run with the ball in recent times, Yuvraj made it clear that batting will remain his priority. "Bowling, I won't say, has (helped) regaining my confidence."

Asked why India did not opt for the batting powerplay during his partnership with Dhoni, he said, "We just wanted to play till the end and didn't want to lose a wicket at that stage."

The left-hander felt the turning point of the match was Niall O' Brien's run out by Virat Kohli and Mahendra Singh Dhoni.

Yuvraj has now scored two successive fifties in the tournament but when asked if he is the right contender for the number four slot, he said, "We have a team strategy and won't change slots because of one or two fifties."

Yuvraj felt the ability to do well at any given situation bodes well for the team.

"In every situation, everyone is doing well, and that's a good sign," he said. Yuvraj also said that Ireland deserved to play in the World Cup.

Rival captain William Porterfield said the wicket of Niall O' Brien was the turning point in their innings, adding that things went wrong after the second drinks break. "After that drinks break we lost a few of wickets, and that set us back. I think 250-260 would have been a very competitive total. We lost two wickets in the first three overs and it wasn't easy to get going. Got a decent partnership after that, but then lost three quick wickets."

Asked about the injury to Trent Johnston, he said, "There is no fracture, and hopefully, he will be fit by the next game."

Comments
Topics mentioned in this article
Cricket World Cup 2011 Anil Kumble Yuvraj Singh Gary Kirsten Ireland Cricket Team
Get the latest updates on India vs South Africa and check out  Schedule, Results and Live Score. Like us on Facebook or follow us on Twitter for more sports updates. You can also download the NDTV Cricket app for Android or iOS.