James Tredwell on Friday labelled the circumstances of his World Cup debut as "the toughest you can get" as he helped England stay alive in the tournament. 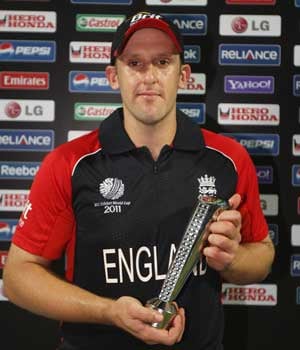 James Tredwell on Friday labelled the circumstances of his World Cup debut as "the toughest you can get" as he helped England stay alive in the tournament.

The 29-year-old off-spinner was summoned from the sidelines and responded in style with a superb return of four for 48 as England defeated the West Indies by 18 runs in a must-win Group B clash.

Not only did Tredwell, wicketless in three previous one-day internationals, remove power-hitting opener Chris Gayle for 43, he also sparked the collapse that saw the final four wickets lost for just three runs.

England still need other results to go their way if they are to qualify for the quarterfinals but Tredwell said: "That's the toughest you can get. You know if you come through those situations, you are doing alright.

"I hadn't taken a wicket yet in ODIs, so there was that initial personal pressure. There was more on it for me than there had been before."

Tredwell added: "It is difficult sitting on the sidelines. You keep yourself ticking over in the nets but we all know it's not the same.

"It is more of a mental challenge. Sometimes you can say to yourself 'I'm not going to play again' and that can be dangerous because, especially in this part of the world, you never know with illness and things like that."

The West Indies, chasing 244 for victory, were well-placed at 53 without loss off six overs when Tredwell came on for his first competitive bowling stint since an ODI against Australia in Hobart in January.

Gayle slog-swept his fourth ball for four but Tredwell, maintaining a good length, had the left-hander, half-forward, lbw next ball although he had to wait for the batsman's unsuccessful review before the dismissal was confirmed.

"I just try to take the guy at the other end out of it a little bit," explained Kent player Tredwell.

"If he (Gayle) ends up whacking that for six or four, then fair play, he's a decent player, so give him a bit of credit sometimes.

"Ultimately, you've got to reproduce your skill which you practice tirelessly in the nets in the middle."

Tredwell added it was "the worst thing" for an England side that has lost to both Ireland and Bangladesh at this World Cup, yet tied with co-hosts India and beaten South Africa, to no longer be in control of their own destiny.

Yet if the Proteas beat Bangladesh on Saturday, England will be into the quarterfinals and Tredwell hopes they can raise their game in this 'must-win' phase, as they did when winning the World Twenty20 in the Caribbean last year.

"Sometimes that brings the best out in people. Hopefully, that's the case with us. It's must win now - three games and the World Cup could be ours."