Transformed South Africa aim for semis as they lock horns against underdogs New Zealand in a World Cup quarterfinal. 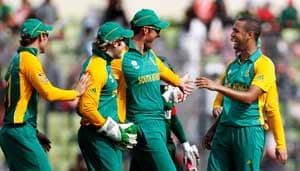 Like the ghost of World Cups past, New Zealand have visited South Africa's campaigns in every tournament since 1992. Each time they have been clear underdogs against a team with a fabled dedication to clinical professionalism, but more often than not they reminded the South African scrooges of the frailty of a rigid formula. The timbre of those reminders has rung with increasing insistence, and when their paths crossed in 2003 and 2007, New Zealand were clear winners.

The lesson has been learned, and this time South Africa's progress has been notable for its break from the formulaic approaches of the past. In Imran Tahir they've found the final component in a team of near-perfect balance, and have shown a refreshing willingness to adapt as opposition or conditions demand. They have two of the best fast bowlers in the world, but both Robin Peterson and Johan Botha have opened the bowling at different stages.

But while South Africa's approach may have changed, there is a familiar look to their results from the group stages. West Indies, Netherlands and Bangladesh were dispatched with consummate ease. The loss to England may have raised old fears about the 'C' word, but that defeat never threatened South Africa's march to the second round and they immediately shrugged off the 'chokers' tag (a phrase that seems to be focussed on more obsessively in the media than it is by anyone in South Africa's camp) with a thrilling, last-over win against India.

How could New Zealand, who floundered against Australia and Sri Lanka and made the quarter-finals thanks mainly to a meltdown that only Pakistan could have delivered, possibly hope to derail the mighty South Africans? Outgunned with both bat and ball, and struggling with injuries, they will have to resort to the sort of scrapping, street-wise cricket for which their previous World Cup campaigns have been renowned. A transformed South Africa are determined to correct the mistakes of the past, but the return of Daniel Vettori will inspire New Zealand and this match could well be won by whichever team is better able to maintain temperament and composure.

Imran Tahir may not be South Africa's leading wicket-taker in the tournament so far - that title belongs, surprisingly, to Robin Peterson - but his inclusion is symbolic of South Africa's new approach to limited-overs cricket. He's also their first attacking wrist spinner in a cricketing generation, and should find conditions in Mirpur to his liking. If New Zealand's top order can survive the early onslaught from Dale Steyn and Morne Morkel, Graeme Smith will turn to Tahir, confident in his ability to pick up cheap wickets with a variety of legspinners, sliders and wrong 'uns.

New Zealand have a couple of limited-overs stars in their ranks, such as Brendon McCullum and Jesse Ryder, but their strength as a team is their potential to gel and become more than the sum of their parts. Their captain, Daniel Vettori, is the vital ingredient in that formula. Whether with bat, ball or in the field, Vettori seems to inspire by his very presence and as a seasoned cricketer he won't be intimidated by South Africa. There have been hints that Vettori could give up ODIs after this tournament, giving him an added incentive to go out on a high.

South Africa gave away nothing in terms of likely selections or injury troubles in the lead-up to the game, and there's been no word on whether or not AB de Villiers has recovered from injury. Given the importance of the match, it's likely he will play even if not fully fit, and perhaps not be asked to keep wicket. That means wicketkeeper Morne van Wyk will keep his place in the XI, possibly at Faf du Plessis's expense. With Dale Steyn and Morne Morkel slotting back in in place of Lonwabo Tsotsobe and Wayne Parnell, South Africa will probably fill the remaining slots with their three spinners.

Brendon McCullum has apparently recovered from a painful knee, and Vettori is also set to return. New Zealand have been affected by several injuries in this tournament, with Kyle Mills suffering a quad strain and Hamish Bennett's tournament ended by an injury to his ankle and Achilles tendon. Daryl Tuffey has been called up as cover, but if Mills is fit he'll be the first choice to partner Tim Southee with the new ball.

Both teams will know just what to expect from the Mirpur wicket, and although Graeme Smith said that he was surprised by the amount of grass on the track, it should still play on the slow, low side and aid spinners. Hot and humid weather is expected, and so dew could come into play if evening is cloudless, although its impact should be minimal.

* Jacques Kallis has more runs against New Zealand in ODIs than any other South African, having scored 1385 at 41.96, including three hundreds and nine fifties in 42 matches.

* Tim Southee is New Zealand's leading wicket-taker in the tournament, with 14 scalps at 15.07. Ross Taylor leads their run-scoring table, with 245 at an average of 81.66 and a strike rate of exactly a-run-a-ball.

Comments
Topics mentioned in this article
South Africa Cricket Team World Cup 2011 New Zealand Cricket Team Pakistan Cricket Team Cricket
Get the latest updates on ICC T20 Worldcup 2022 and CWG 2022 check out the Schedule, Live Score and Medals Tally. Like us on Facebook or follow us on Twitter for more sports updates. You can also download the NDTV Cricket app for Android or iOS.