Team officials say England bowler Tim Bresnan went through a precautionary scan on his calf after feeling discomfort in his right leg. 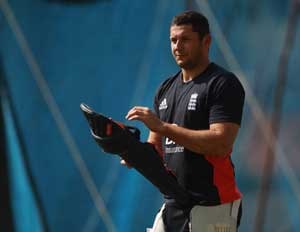 Team officials say England bowler Tim Bresnan went through a precautionary scan on his calf after feeling discomfort in his right leg.

Bresnan felt minor pain on Wednesday but a team official hoped the medium fast bowler, who also bats lower down the order, will be fit for Saturday's quarterfinal against Sri Lanka.

Bresnan flew back home during the one-day series against Australia earlier his year when he suffered injury in the same muscle.

He has shouldered the burden of England's seam attack by taking nine wickets in six World Cup group matches as his fellow pace bowlers have struggled on the slow wickets of the subcontinent.

Comments
Topics mentioned in this article
World Cup 2011 England Cricket Team Australia Cricket Team West Indies Cricket Team James Anderson Tim Bresnan Cricket
Get the latest updates on India vs South Africa and check out  Schedule, Results and Live Score. Like us on Facebook or follow us on Twitter for more sports updates. You can also download the NDTV Cricket app for Android or iOS.