Former Indian captain Kapil Dev on Thursday said that a combination of three all-rounders and two genuine bowlers would have been an ideal combination but the team can still win the ongoing World Cup with hard work. 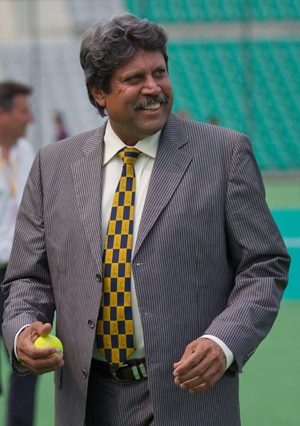 Former Indian captain Kapil Dev on Thursday said that a combination of three all-rounders and two genuine bowlers would have been an ideal combination but the team can still win the ongoing World Cup with hard work. "Ideally there should have been three all-rounders and two genuine bowlers but since we don't have them we have to work hard to win. If you don't think you can win, then you must stop playing," Kapil said.

"We don't have a potent bowling attack but that does not mean we cannot win. If you lose heart how will you win?" he asked.

Kapil said Indian bowlers were not up to the task against England in their tied World Cup match against England and advised Mahendra Singh Dhoni's men to improve their performance in the coming games.

"It is easy to talk but I think the players in the middle also know about their weakness and try to work on that. It is important to learn from your past experiences rather than cribbing on the result.

"You cannot always be on the winning side some day you might even lose the game, the team which plays good will win," Kapil said on the sidelines of the release of a book -- World Cup: A Pictorial Journey.

Asked if the cricketers should know rules applicable under the controversial Umpire Decision Review System, Kapil said, "Rules for every player are important. If you are playing at the highest level then you should know the rules and regulations.

"It is like, you are appearing for your graduation exams and you have not learned your lesson. Unawareness of rules makes you weak," he said.

Kapil sympathised with pace bowlers on the placid sub-continental tracks, saying that nobody wants to think about the "mazdoor (labourer)".

"Nobody thinks about the mazdoor. In today's game batsman is the officer. But the team with a good bowling unit has more chances of winning. With an increase in the placid tracks the art of bowling will come down," Kapil said.

The 1983 World Cup-winning captain lavished praise on Sri Lanka's Lasith Malinga, saying that he had played a big role in his team's success.

"Malinga is good, particularly with his slinging action he is difficult to pick. He will be a determinant force for Sri Lanka," Kapil said and added that teams should also look out for Shoaib Akhtar and Brett Lee.

Asked what he feels about the changing trends in coaching style particularly the way the players warm up playing football and other things, Kapil said, "Everyone has his own style of working".

Comments
Topics mentioned in this article
India Cricket Team World Cup 2011 Ramlal Nikhanj Kapil Dev Cricket
Get the latest updates on ICC T20 Worldcup 2022 and CWG 2022 check out the Schedule, Live Score and Medals Tally. Like us on Facebook or follow us on Twitter for more sports updates. You can also download the NDTV Cricket app for Android or iOS.