As it turned out, almost all the experts read the wicket wrong. MS Dhoni and Sachin Tendulkar admitted as much in the post-match presentation, and from the scores it's obvious that run-making was a lot more difficult on this Mohali pitch than it was expected to be. 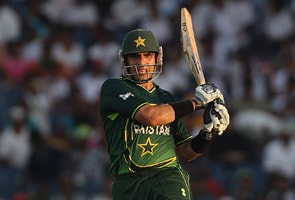 As it turned out, almost all the experts read the wicket wrong. MS Dhoni and Sachin Tendulkar admitted as much in the post-match presentation, and from the scores it's obvious that run-making was a lot more difficult on this Mohali pitch than it was expected to be. The team composition and the early overs suggested a score of around 300 would be a par total, but later events showed it was another subcontinent track on which run-scoring against the hard new ball was much easier.

In that context, the difference between the two teams was the runs they scored in the first 15 overs, when the ball was new. Pakistan's top three played useful cameos too, but none of them exploded in the manner that Virender Sehwag had. Sehwag's 25-ball 38 allowed India to rack up 99 in the first 15 overs, compared to Pakistan's 70. The difference of 29 was exactly the margin by which Pakistan lost the match, which means in the remaining 35 overs, the two teams scored exactly the same number of runs. Of course, the approaches of the two teams at the start were obviously different since Pakistan knew the target in front of them, but Pakistan struggled as much as India did in the middle overs. What made their case worse was the fact that they got no reciprocal help from the Indian fielders, or from the dew which was expected to set in later in the evening.

How the Indian and Pakistan innings shaped up

Misbah-ul-Haq's strike rate at the end of his innings was 73.68; Tendulkar's rate for his 85 was 73.91. That, perhaps, is as good an example as any to illustrate the fact that stats without context is meaningless. Misbah's inexplicable go-slow through the first half of his innings resulted in the asking rate climbing to unmanageable proportions, and it also forced the other batsmen to take risks that might otherwise have been unnecessary. He tried to make up for it later, but apart from helping him reach a personal landmark and improving his strike-rate, his late hits counted for little.

Overall, Misbah played out 42 dot balls, which was the most among Pakistan's batsmen. In his first 42 balls, he scored only 17 and played 27 dots. During this period, Pakistan's asking rate went up from 6.07 to 8.45. Younis Khan's sluggish innings didn't help either - add his 13 from 32 balls to Misbah's 17 in his first 42, and Pakistan have every reason to feel their two most experienced batsmen didn't serve them well: in those 74 balls, the two batsmen got a grand total of 30 runs, with no boundaries. Even with the power-hitters to follow, that was a bridge too far.

A spell to remember

The batsmen's poor effort ensured that a wonderful bowling performance by Wahab Riaz went in vain. He became only the second bowler, after Venkatesh Prasad, to take a five-for in an India-Pakistan World Cup match. He joins eight other Pakistan bowlers to have taken a five-for in an ODI against India.

Tendulkar has won nine Man-of-the-Match awards in World Cups, which is easily the highest. Three of those have been against Pakistan: he'd also won the prize against them in 1992 and in 2003.

Sehwag and Dhoni joined five other Indian batsmen to score 1000 ODI runs against Pakistan. Tendulkar leads with 2474 runs at an average of 39.90.

Comments
Topics mentioned in this article
India Cricket Team Pakistan Cricket Team World Cup 2011 Cricket
Get the latest updates on ICC T20 Worldcup 2022 and CWG 2022 check out the Schedule, Live Score and Medals Tally. Like us on Facebook or follow us on Twitter for more sports updates. You can also download the NDTV Cricket app for Android or iOS.