Ireland teenager George Dockrell said it had been a "dream come true" for him to dismiss Sachin Tendulkar after the underdogs gave World Cup co-hosts India a fright. 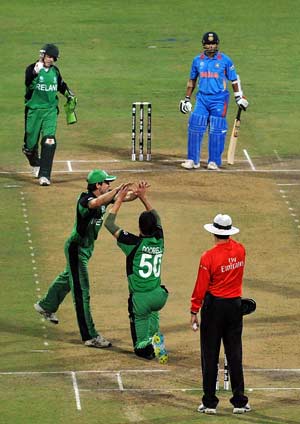 Ireland teenager George Dockrell said it had been a "dream come true" for him to dismiss Sachin Tendulkar after the underdogs gave World Cup co-hosts India a fright.

India won the Group B match against the associate nation by five wickets at the Chinnaswamy Stadium here on Sunday.

But they were made to work hard for their success by an Ireland side that had already produced the performance of this World Cup to beat England by three wickets, and who ought to have defeated Bangladesh in their tournament opener.

Left-arm spinner Dockrell had batting great Tendulkar lbw for 38 and later dismissed India captain Mahendra Singh Dhoni, also leg before, on his way to fine figures of two for 49 in 10 overs -- not bad for an 18-year-old.

"I am a big fan of Sachin Tendulkar," Dockrell told Deccan Herald. "I tried to catch a glimpse of him at training sessions here in Bangalore. I admire his style of batting.

"And getting him out was a dream come true."

Ireland could only manage 207 all out against India but bowled and fielded tigerishly to have their opponents in trouble at 100 for four.

A packed crowd made almost as much an impression upon Dockrell as the India batsmen, with the youngster relishing the experience.

"We were looking forward to playing in front of a full house and so much cheering, noise, hooting and energy from 45,000 people was amazing. It added that much needed excitement to the game."

But Dockrell added: "It pays to be calm yet persistent. There's no point getting worked-up. You can't prevent what's to come but you can give every moment your best shot."

"They're iconic and their commitment to the sport is unmatched," Dockrell said of India's star-studded top order. "There's so much power in them."

Ireland, who've still to play the West Indies, South Africa and the Netherlands, are fifth in Group B and in the hunt for a quarter-final spot, with the top four sides in both pools going through to the last eight.

Comments
Topics mentioned in this article
World Cup 2011 India Cricket Team Ireland Cricket Team Sachin Ramesh Tendulkar George Dockrell Cricket
Get the latest updates on ICC T20 Worldcup 2022 and CWG 2022 check out the Schedule, Live Score and Medals Tally. Like us on Facebook or follow us on Twitter for more sports updates. You can also download the NDTV Cricket app for Android or iOS.