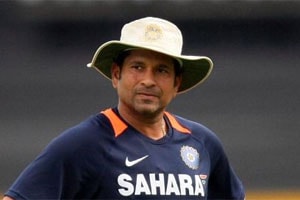 Tendulkar walked back to the pavillion despite the umpire signalling not out during India's league match against the West Indies, while Ponting stayed his ground till he was ruled out after a successful review by Pakistan in another match.

Tendulkar was hoping to score his 100th international hundred but his innings ended when he was dismissed for just two. He faced only four balls, clipping fast bowler Ravi Rampaul to wicket-keeper Devon Thomas and he walked without waiting for the umpire's decision.

Ponting had made 19 when he edged off-spinner Mohammad Hafeez to Kamran Akmal at the R Premadasa stadium in Colombo on Saturday.

When on-field umpire Marias Erasmus gave the Australian captain not out, the decision was reviewed and overturned.

Ponting admitted he knew he had edged the ball but said he had always waited for the umpire's decision all through his career.

"There were no doubts about the nick, I knew I hit it, but as always I wait for the umpire to give me out. That's the way I've always played the game," he said.

West Indies captain Darren Sammy hailed Tendulkar as "a true gentleman" for walking despite Australian umpire Steve Davis ruling him not out.

"It shows the measure of the man (Tendulkar). He is a true gentleman. After 17,000 runs, he could walk. That was brilliant on the part of Sachin," Sammy said after his side lost their last Group B match by 80 runs here last night.

Yuvraj, who set up the win for India, was not surprised with Tendulkar walking.

"I am not surprised. He (Tendulkar) felt that he has to walk and he walked. It is a personal decision. It should be left to the person concerned," said Yuvraj who hit his maiden World Cup ton (113) and later took two West Indies wickets.

Sri Lanka vice-captain Mahela Jayawardene and Kiwi off-spinner Nathan McCullum were also involved in a clash over a 'clean' catch in their league match in Mumbai.

McCullum took a brilliant, one-handed diving catch off Jayawardene but TV umpire Amish Saheba was called in and he ruled it not out.

New Zealand's stand-in skipper Ross Taylor said it would make things easier if batsmen were to take the word of the fielder in such situations.

"It depends upon the person. You look at (South Africa batsman) Jacques Kallis. He asks the fielders if they caught it cleanly and he trusts the words of the fielders," said Taylor.

Jayawardene, who went on to make 66 and shared a vital 145-run stand with captain Kumar Sangakkara (111) to set up Sri Lanka's comprehensive 112-run win, was adamant he was right to stand his ground.

Pakistan coach Waqar Younis said it would be a boost for the game if players walked.

"It's nice to see people walking but that doesn't happen now I guess. There is a system in place now so you can't get away with it. I mean people still take chances and why not? Jayawardene took a chance and it went the other way."

Comments
Topics mentioned in this article
World Cup 2011 Sachin Ramesh Tendulkar Cricket
Get the latest updates on ICC T20 Worldcup 2022 and CWG 2022 check out the Schedule, Live Score and Medals Tally. Like us on Facebook or follow us on Twitter for more sports updates. You can also download the NDTV Cricket app for Android or iOS.