Taylor questions use of technology

Ross Taylor, New Zealand's stand-in captain, has said that if technology cannot be conclusive it should just not be used. 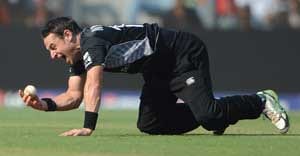 Ross Taylor, New Zealand's stand-in captain, has said that if technology cannot be conclusive it should just not be used. Taylor's remarks came in the wake of the controversial return catch of Mahela Jayawardene during the Sri Lanka innings, which was pouched spectacularly by Nathan McCullum who threw himself to his right to hold the catch inches above the green turf. But the third umpire ruled the decision against New Zealand.

Jayawardene went for a premeditated push towards the leg side, but got surprised by a slower delivery from McCullum which arrived late. Having rushed into the shot, Jayawardene could only watch the ball loop towards the unmanned space at silly mid-on. But McCullum leaped from the spot where he had finished his follow-through as if he was standing on a diving board. Amazingly the New Zealand offspinner managed to get the tips of the fingers of his outstretched right hand under the ball.

Viewed from the press box, which is behind the bowler's arm, the first reaction was the catch was taken on the first bounce. But numerous close replays indicated McCullum had actually held one of the catches of the tournament. His reaction was nothing short of ecstatic: he picked himself up and stamped the ground with one foot and pirouetted delightfully. But Jayawardene had his doubts and asked Asad Rauf, one of the on-field umpires, to refer the decision to the TV umpire. Moments later, third umpire Amiesh Saheba gave Jayawardene the benefit of the doubt, much to the chagrin of McCullum. Along with his captain Ross Taylor, both men argued with the on-field umpire Rauf briefly before leaving with their heads shaking. Simon Doull, former New Zealand fast bowler, was livid in the commentary box and was adamant about the authenticity of the catch.

It was a critical moment in the match when Sri Lanka were struggling at 87 for 2 after 23.1 overs with Jayawardene on 26. "I haven't seen the catch, I have seen it only live. I thought it was carried, but the third umpire obviously had other things," Taylor said after the match. "When you generally think that you have taken the catch, it's your natural instinct. It is disappointing."

Asked if he would prefer the batsman taking a fielder's words in such a situation, Taylor said he would not rule that out. "It depends upon the person. You look at Jacques Kallis; he asks the fielders if they caught it cleanly and he trusts the words of the fielders. You put it up to the batsman to make the decision and at the end of the day you just hope the technology is right and if the technology is not right, well then don't use it."

Kumar Sangakkara, Sri Lanka's captain and Jayawardene's batting partner at the time of the incident, differed. According to Sangakkara, his team-mate had the right to ask for a referral. "I was completely blocked from behind. Mahela was very honest and he said he was not sure he caught it cleanly," Sangakkara said. "Mahela is someone who walks when he nicks it and if he saw Nathan had taken a clean catch he wouldn't have come around. He wasn't very sure and the umpires weren't sure because they were unsighted, so they checked with the technology and they went in favour of Mahela."

Sangakkara pointed out that during the New Zealand innings, Brendon McCullum had also waited for the third umpire's ruling on a low catch held at slip by Jayawardene, though it is not certain whether that was simply done in retaliation. "That's the way the game is played," he said. "We had Brendon McCullum stand his ground when Mahela took that catch and they went upstairs and it was proved that it was a clean catch. So it can go either way."

Comments
Topics mentioned in this article
Cricket Ross Taylor Sri Lanka Cricket Team New Zealand Cricket Team World Cup 2011 Nathan McCullum
Get the latest updates on India vs South Africa and check out  Schedule, Results and Live Score. Like us on Facebook or follow us on Twitter for more sports updates. You can also download the NDTV Cricket app for Android or iOS.