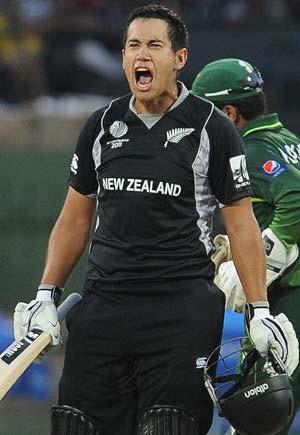 Akmal missed two chances to dismiss the New Zealand vice-captain in the same Shoaib Akhtar over when he was on nought and eight.

"It's been well documented back home that I haven't been in the greatest form of my life. It's been frustrating for myself, and probably a lot of others as well," said Taylor, who hit his century on his 27th birthday.

"When you're out of nick you need a bit of luck and I got that.

"Over the last few months I've been trying to search for the perfect game and today, and even the last couple of games, I've just tried to keep things as simple as possible and just watch the ball. Today was my day."

Taylor jokingly admitted he owed Akmal a free meal for his unwitting help in setting up his birthday treat.

"Whatever Kamran wants, I think I owe him dinner or something," said Taylor after Tuesday's match which put New Zealand on top of Group A with six points from four matches and a better net run-rate than second-placed Pakistan.

Taylor, who ended the night deputising for Daniel Vettori after the skipper limped off with a knee injury while attempting a catch, said he had received a series of good wishes messages.

"I didn't get any presents, so that was a pretty good present (two dropped catches). I was on my emails and Facebook and Twitter this morning and I had a lot of birthday wishes.

"A lot of them said it would be good to get a hundred on your birthday. More often than not that doesn't come, but today it did," said Taylor, whose last hundred came against Bangladesh in October 2008.

In all Taylor hit seven sixes and eight boundaries in his fourth one-day hundred, improving on his 128 not out against Sri Lanka at Napier in 2006.

Taylor paid tribute to his teammates.

"My dropped chance obviously had a little bit to play in the result. But I thought the way Kyle Mills and Tim Southee bowled was outstanding," said Taylor of the pacemen who took five wickets between them to leave Pakistan at 45-5.

"To chase a score of 300 and to be four or five down in the first 15 or 20 overs put Pakistan on the back foot pretty quickly.

"We would have liked to have wrapped it up a bit quicker, but in saying that if you'd asked me at the start of the day if we'd win by 100 runs I would have taken it."

New Zealand next play Canada in Mumbai on March 13.

Comments
Topics mentioned in this article
Kamran Akmal New Zealand Cricket Team Pakistan Cricket Team Sri Lanka Cricket Team Ross Taylor World Cup 2011 Cricket
Get the latest updates on ICC T20 Worldcup 2022 and CWG 2022 check out the Schedule, Live Score and Medals Tally. Like us on Facebook or follow us on Twitter for more sports updates. You can also download the NDTV Cricket app for Android or iOS.