South African spinner Imran Tahir has been advised rest for 10 days after a fracture on his left thumb was confirmed following an X-ray performed on Wednesday. 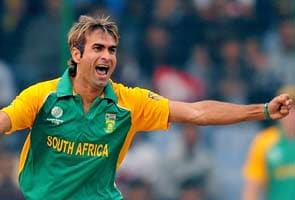 South African spinner Imran Tahir has been advised 10 days rest after a fracture on his left thumb was confirmed following an X-ray performed on Wednesday. Tahir suffered the injury while taking a catch off his own bowling to dismiss Jonathan Trott in the match against England on Sunday.

South Africa although remain hopeful about his particiation in the rest of tournament as the fracture is not on Tahir's bowling hand. "The team management have not decided if he will play against India," Mohammed Moosajee, the team manager told ESPNCricinfo.

However, with the latest development of being advised rest for a couple of days, Tahir's chances of playing against India on Saturday look very slim.

The selection committee of South Africa will soon take a call on his selection and future participation.Â

The Pakistan born spinner is South Africa's leading wicket-taker with 11 scalps and is the second highest wicket-taker in the tournament behind Shahid Afridi.

Comments
Topics mentioned in this article
World Cup 2011 Imran Tahir South Africa Cricket Team Cricket
Get the latest updates on ICC T20 Worldcup 2022 and CWG 2022 check out the Schedule, Live Score and Medals Tally. Like us on Facebook or follow us on Twitter for more sports updates. You can also download the NDTV Cricket app for Android or iOS.