England captain Andrew Strauss hopes South Africa will take his team lightly following their shock defeat by Ireland when they face the Group B leaders in a World Cup pool match on Sunday. 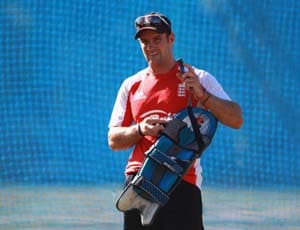 England captain Andrew Strauss hopes South Africa will take his team lightly following their shock defeat by Ireland when they face the Group B leaders in a World Cup pool match on Sunday.

England went down to a stunning three-wicket defeat by Ireland in Bangalore on Sunday, with Irish batsman Kevin O'Brien striking the fastest-ever World Cup century in one of the tournament's greatest all-time upsets.

South Africa, by contrast, have cruised to wins over the West Indies and the Netherlands as they, like England, chase a first World Cup title.

"The great thing about this tournament is you have a chance to get back on the bike straight away," said Strauss.

"It's something as a side we've been very good at in the past -- bouncing back when we've had a poor performance. Hopefully, South Africa will treat us more lightly, given we've lost to Ireland."

England's attack has conceded huge totals in all three of their tournament matches to date, even going for 292 against the Dutch in an opening six-wicket win in Nagpur.

It's a far cry from how many of the same bowlers repeatedly routed Australia in the recent 3-1 Ashes series triumph and Strauss said: "It's been tough, some of our bowlers have had an injury lay-off and are coming back in.

"None of them are happy with their form but there's still an opportunity for us to win the World Cup and improve.

"The most important thing is you retain belief in yourself. We've beaten South Africa many times before, Bangladesh before and West Indies before.

"If we win three games we're definitely into the quarter-finals."

But despite the impact of the Ireland loss, Strauss still found time to observe the traditional post-match courtesies.

"In terms of having a drink with the Irish boys, I always think you can win with class and lose with class. In that sense, it was the right thing to do."

He added the defeat by Ireland, which followed England's almost as dramatic a tie with India days earlier in Bangalore, had fired up his side.

"The motivation is there -- you want to show people you're better than what you showed in the last game.

"We did that pretty well against India although we should have got over the line and won. Now we need to do it again."

Comments
Topics mentioned in this article
World Cup 2011 Andrew Strauss Eoin Morgan Cricket
Get the latest updates on ICC T20 Worldcup 2022 and CWG 2022 check out the Schedule, Live Score and Medals Tally. Like us on Facebook or follow us on Twitter for more sports updates. You can also download the NDTV Cricket app for Android or iOS.