Ireland's disciplined bowling and far superior fielding proved the difference between the two sides, and they eventually triumphed by six wickets. 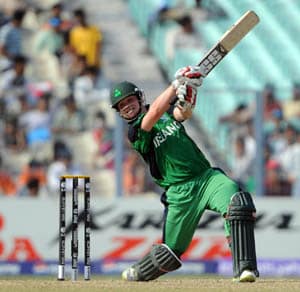 Two sparkling centuries lit up Ireland's clash with Netherlands at Eden Gardens in Kolkata, Ryan ten Doeschate propping Netherlands up with his second ton of the tournament and Paul Stirling then launching Ireland's pursuit of 306 with a blazing, 72-ball 101.

Ireland's disciplined bowling and far superior fielding proved the difference between the two sides, and they eventually triumphed by six wickets with more than two overs to spare after a far closer finish had appeared possible.

Apart from one lapse in the first over, Ireland had barely fumbled while restricting Netherlands on a benign, batting-friendly surface and closed out the innings in bizarre circumstances with four run-outs in four balls. Netherlands were nowhere near as tight in comparison, putting down three clear chances and failing to keep the pressure on in the field, their lapses repeatedly allowing Ireland's to stay ahead of the game.

Netherlands should have had a breakthrough as early as the third over, but Adeel Raja put down a top edge off William Porterfield's bat at third man and Ireland were soon rocketing along at eight an over. Stirling provided the main impetus in that regard, swinging from the hip from the very start of his knock, as the first ball he faced was answered with a wild hook and a top edge that sailed straight over the wicketkeeper for six. He barely slowed down thereafter, hitting very little straight down the ground but repeatedly puncturing the field on both sides of the wicket.

He plundered 19 from Bernard Loots' second over, including a second six over deep midwicket, and shortly after brought up a 25-ball half century, the second fastest in the tournament. Porterfield was rather more circumspect but had no problems putting the bad ball away, and after 68 out of 81 runs came in boundaries in the first 10 overs Netherlands were forced to postpone their use of the Bowling Powerplay simply to try and slow Ireland down.

With Pieter Seelaar and ten Doeschate, Netherlands two most accomplished bowlers, operating in tandem the tactic temporarily worked but when the Bowling Powerplay was eventually taken in the 19th over, and the batsmen attempted to pick up the tempo once again Netherlands put down two chances in as many overs - one off each batsman - to lose further ground.

Porterfield eased past fifty in the 20th over but by then Stirling already had a hundred in his sights. Their partnership stretched to 177, a new Irish record for the opening stand in ODIs, before, in a three-ball flurry excitement, Porterfield fell to a catch behind and Stirling brought up his century but then thumped the next ball - a long-hop - straight to the fielder on the deep midwicket boundary. Their departures opened a window of opportunity for Netherlands but Ireland's chase barely missed a step, with each successive batsman making a contribution and the brothers O'Brien closing out the game with an unbroken 28-run partnership at close to nine an over.

While lacklustre bowling and fielding let Netherlands down, the ascendancy had swung between the two teams before lunch and Netherlands had gained the ascendancy in an attacking stand between ten Doeschate and captain Peter Borren. The Ireland bowlers had few answers against the pair and were hampered by an injury to young left-arm spinner George Dockrell, who appeared to dislocate his shoulder as he dived to stop the ball and had to immediately leave the field.

In his absence, ten Doeschate and Borren added 121 for the fifth wicket, by far the largest stand of the innings, in quick time on a pitch that looked increasingly good for batting after the early-morning moisture had been scorched from the surface. ten Doeschate had also been involved in two other important partnerships after Netherlands lost two early wickets and then suffered a further casualty when Barresi was forced to leave the field in just the second over after being hit on the back of the head by a return throw from Kevin O'Brien.

ten Doeschate kick-started his innings by adding 41 with Alexei Kervezee, who struggled to deal with the early bounce and movement and eventually gave his wicket away softly, pushing a length delivery from John Mooney straight into the hands of Kevin O'Brien. That dismissal brought Barresi back to the crease, and he immediately set about the Irish bowling. He raced into the 40s before he was pinned in front of his stumps, but Dockrell's injury noticeably dampened Ireland's mood and ten Doeschate and Borren quickly seized the initiative once again.

ten Doeschate raised his fifty in the 27th over and with the field set back in defence, the partnership developed with plenty of running between the wickets before he opened up as he closed in on a century. Borren raced to a 56-ball half-century in the 38th over and ten Doeschate went to his own landmark soon after in the midst of another expensive over from Rankin. He celebrated by heaving Stirling over wide long-on but fell trying to repeat the shot next ball, caught at long-off by Mooney.

Borren and wicketkeeper Atse Buurman didn't allow the pitch to slow Netherlands' momentum and continued to find the boundary - though more than once it was courtesy of outside edges and slashes past third man but the innings ended in farcical circumstances when Netherlands lost four wickets in four balls - all run out - to be bowled out for 306. That still might have been a match-winning total, but ultimately Ireland showed the value of their greater professionalism and the enhanced self-belief that has come from their positive performances in this tournament.

Comments
Topics mentioned in this article
World Cup 2011 Netherlands Netherlands Canada Belarus France Mexico Portugal Ireland Cricket Team Cricket William Porterfield
Get the latest updates on ICC T20 Worldcup 2022 and CWG 2022 check out the Schedule, Live Score and Medals Tally. Like us on Facebook or follow us on Twitter for more sports updates. You can also download the NDTV Cricket app for Android or iOS.