Statistical highlights of the Group A World Cup match between Zimbabwe and New Zealand on Friday. 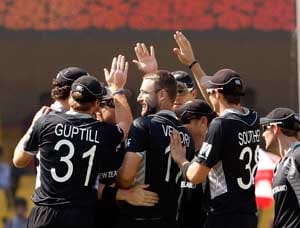 Statistical highlights of the Group A World Cup match between Zimbabwe and New Zealand here on Friday.

# New Zealand's win over Zimbabwe is their sixth in ODIs - one each against India, Bangladesh, Australia, Kenya, England and Zimbabwe.

# Zimbabwe have lost two games by ten-wicket margin in the world cup - their first was to West Indies at Birmingham on June 20, 1983.

# Zimbabwe (162) have posted their lowest total against New Zealand in the world cup when they have lost all ten wickets, surpassing the 175 at Leeds on June 6, 1999.

# Tim Southee (3/29) has recorded his second three-wicket haul in the world cup. Against Kenya (3/13) at Chennai on February 20, 2011, he had produced his best world cup performance.

# Southee's excellent figures of 7 at 12.42 runs apiece in three games are the best by a New Zealander in the 2011 edition of the World Cup.

# After being wicketless on his world cup debut, Kyle Mills has bowled exceedingly well to claim two for 29. # Charles Coventry's first world cup duck is his fifth in ODIs

# Brendan Taylor (44)has posted his highest in the present competition.

# Martin Guptill and Brendon McCullum have averaged 51.38 in 15 innings - 668 runs, including one hundred and six fifty-plus.

# Brendon McCullum (76 not uot) has registered his second fifty at the world cup, his highest, eclipsing the 52 not out against Canada at Gros Islet on March 22, 2007.

# McCullum has become the first New Zealand wicketkeeper to post two fifties at the world cup.

# The only other New Zealand wicketkeeper to post a fifty at the world cup, Lee Germon holds a New Zealand record as well - 89 off 96 balls against Australia at Chennai on March 11, 1996. Germon was also the captain in the said game.

# Martin Guptill (86 not out) has posted his highest innings at the world cup, surpassing the 39 not out off 32 balls against Kenya at Chennai on February 20, 2011.

# Martin Guptill has got the Man of the Match for the second time in ODIs - his first was against Bangladesh at Christchurch on February 11, 2010.

# The 166-run match-winning stand (unbroken) between Guptill and McCullum is the highest for New Zealand for the first wicket in the world cup, outstripping the 142 between Stephen Fleming and Lou Vincent against Canada at Gros Islet on March 22, 2007.

# Prosper Utseya (36 off 65 balls) has registered his highest innings in the world cup, eclipsing the 24 off 45 balls against Australia at Ahmedabad on February 21.

# Price and Utseya, with their 35-run partnership, have set a record for the ninth wicket for Zimbabwe against New Zealand in the world cup.

# Regis Chakabva has registered his first duck in ODIs.

# New Zealand's ten-wicket win is their second in the world cup - their first was against Kenya at Chennai on February 20, 2011.

Comments
Topics mentioned in this article
World Cup 2011 Zimbabwe Cricket Team New Zealand Cricket Team Cricket
Get the latest updates on ICC T20 Worldcup 2022 and CWG 2022 check out the Schedule, Live Score and Medals Tally. Like us on Facebook or follow us on Twitter for more sports updates. You can also download the NDTV Cricket app for Android or iOS.