Statistical highlights of Match 25 of the World Cup between India and Netherlands. 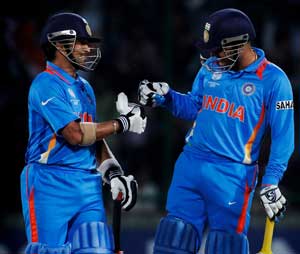 Following are the statistical highlights of Match 25 of the World Cup between India and Netherlands.

# Netherlands (189) have recorded their highest total against India at the world cup, surpassing the 136 at Paarl on February 12, 2003.

# Wesley Barresi and Eric Szwarczynski were associated in a stand of 56, emulating the highest partnership for the first wicket for Netherland at the world cup.Â  Peter Cantrell and Nolan Clarke had recorded 56 against South Africa at Rawalpindi on March 5, 1996.

# The aforesaid opening stand is Netherlands' first ever partnership of fifty or more against India at the world cup.

# Peter Borren (38 off 36 balls) has recorded his highest innings at the world cup, surpassing the 35 not out against England at Nagpur on February 22, 2011.

# Borren's aforesaid knock is the second highest for Netherlands against India at the world cup, next only to the 62 by Daan van Bunge at Paarl on February 12, 2003.

# India have registered victories in both their world cup games against Netherlands - by 60 runs at Paarl on February 12, 2003 and byÂ  wickets at Delhi on March 9, 2011.

# Virender Sehwag (39 off 26 balls) has managed to amass 254 runs at an average of 63.50 in four matches in the present competition - the highest for India.


# The Indians have recorded 82 for three in the first ten overs - the highest by any nation in the mandatory powerplay in the present competition, eclipsing the 81 for one by Sri Lanka against Kenya at Colombo RPS on March 1.


# Sehwag-Tendulkar pair has managed to make 691 in thirteen innings at an average of 53.15, including one century stand and six fifty-plus in the world cup - the third highest in terms of run-aggregate by an opening pair.

# The highest two opening pairs in the world cup have been Adam Gilchrist and Matthew Hayden for Australia - 1220 (ave.64.21) in 20 matches and Herschelle Gibbs and Gary Kirsten for South Africa - 774 (ave.77.40) in twelve games.

# With Wesley Barresi's wicket, Yuvraj Singh has completed his 100 wickets in ODIs.

# Yuvraj's tally of seven wickets at an average of 23.14Â  is his best bowling performance in a world cup competition, eclipsing his previous best performance of 5 wickets (ave.14.00) in the 2002-03 World Cup.


# Yuvraj is the third Indian all-rounder after Sachin Tendulkar and Sourav Ganguly and the eighth overall to complete the double of 7,000 runs and 100 wickets in ODIs.


# Zaheer Khan has taken his tally of wickets at the world cup to 34 in 18 games at an average of 19.11. Only Javagal Srinath (44 in 34 matches) has captured more wickets than Zaheer for India at the world cup.


# The ninth wicket stand of 38Â  between Borren and Mudassar Bukhari is an ODI record at Feroz Shah Kotla, surpassing the 30 (unbroken) between Ajit Agarkar and Sarandeep Singh for India against England on January 31, 2002.

# Piyush Chawla (2/47) has recorded his best world cup performance, bettering the 2 for 71 against England at Bangalore on February 27, 2011.

# Yuvraj Singh (51 not out) has posted three successive fifties at the world cup for the first time.

# Yuvraj has been adjudged the Man of the Match for the second time in the World Cup.

Comments
Topics mentioned in this article
World Cup 2011 Netherlands India Cricket Team Cricket
Get the latest updates on India vs South Africa and check out  Schedule, Results and Live Score. Like us on Facebook or follow us on Twitter for more sports updates. You can also download the NDTV Cricket app for Android or iOS.