Statistical highlights of the group A match between Australia and Kenya in the cricket World Cup. 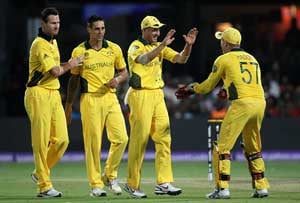 Statistical highlights of the group A match between Australia and Kenya in the cricket World Cup.

# Obuya and Odoyo recorded 86 for the fifth wicket -Kenya's highest against Australia in ODIs.

# Collins Obuya holds the Kenyan record for the highest individual innings and the best bowling in an innings in the world cup.

# Hussey's 37th half-century in ODIs is his fifth in India.

# Against Sri Lanka, eight totals of 300 or more have been recorded at the world cup - the most against any nation.

# Australia (324/6) have registered their highest total against Kenya at the world cup/ODIs, surpassing the 304 for seven at Visakhapatnam on February 23, 1996.

# Michael Hussey and Michael Clarke have added 114 for the fifth wicket - Australia's highest against Kenya in ODIs.

# Haddin and Ponting were associated in a stand of 89 -Australia's highest for the second wicket against Kenya in ODIs.

# Nehemiah Odhiambo (3/57) has registered his best world cup performance, surpassing the 2 for 45 against Canada at Delhi on March 7, 2011.

# Tanmay Mishra (72) has recorded his career-best innings in ODIs. His previous best in the world cup was 51 against Canada at Delhi on March 7, 2011.

# Collins Obuya's unbeaten 98 is his highest innings at the world cup, surpassing the 52 against Sri Lanka at Colombo, RPS on March 1, 2011.

# Collins Obuya's second half-century at the world cup is his ninth in ODIs.

# Collins' aforesaid knock is the highest for Kenya in the world cup, surpassing the 96 by Steve Tikolo against Sri Lanka at Kandy on March 6, 1996.

# Kennedy Otieno's 85 at Visakhapatnam on February 23, 1996 was the previous best for Kenya against Australia in ODIs.

# Clarke's sixth fifty at the world cup is his 47th fifty in ODIs.

# Ricky Ponting (36 off 54 balls) has become the first batsman to amass 1,000 runs as captain at the world cup, aggregating 1030 at an average of 54.21 in 26 games, including three centuries and five fifties

# In his last five innings at the world cup, Ponting's highest is only 37 against Sri Lanka.

# Brad Haddin (65) has posted his highest innings at the world cup, eclipsing the 55 against New Zealand at Nagpur on February 25, 2011.

# Haddin's first fifty against Kenya is his 13th in ODIs.

# Kenya's aforesaid total is their highest aganst Australia in ODIs.

# Australia, with their 60-run triumph, have maintained cent per cent record against Kenya.

# Australia have posted their third win in four games in the 2011 edition of the world cup.

# Kenya have won all five ODIs to Australia.

# With their 54th victory, Australia have extended their record for most world cup triumphs.

# Clarke's splendid 93 is the second highest for Australia against Kenya in ODIs - the highest being 130 by Mark Waugh at Visakhapatnam on February 23, 1996.

Comments
Topics mentioned in this article
Cricket Australia Cricket Team West Indies Cricket Team Kenya Netherlands World Cup 2011
Get the latest updates on ICC T20 Worldcup 2022 and CWG 2022 check out the Schedule, Live Score and Medals Tally. Like us on Facebook or follow us on Twitter for more sports updates. You can also download the NDTV Cricket app for Android or iOS.