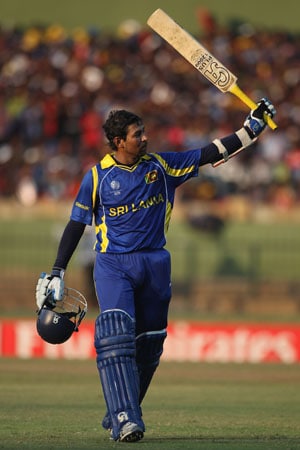 Man-of-the-match Dilshan scored 144 runs off 131 balls as part of an opening stand of 282 with Upul Tharanga, helping his side to a challenging 327-6 against Zimbabwe in Pallekele.

When Sangakkara threw him the ball in the Zimbabwe innings, Dilshan returned the astonishing figures of 4-4, only missing out on a hat-trick because Mahela Jayawardene dropped a regulation chance at slip.

"It's great to play at home. This is where I'm from and it's a magnificent ground, very picturesque and a fitting tribute to Murali," said Sangakkara.

"We managed to cover all areas and with that opening stand managed to put the match beyond the Zimbabweans," he said.

Speaking about Dilshan, the skipper said: "He's got that magic touch with the bat, with the ball and even on the field so he's been one of most important players over the last 10 years.

"And today again he showed how well he can come back from quite a couple of tough weeks for him."

Speaking about the performance of Muralitharan, the highest wicket-taker in ODIs and Tests, Sangakkara said: "He's a champion and that's why he's always rated the best in the world. When the tough times come along he steps up."

"I think for Murali this last game would hold very happy memories."

Muralitharan himself said he was happy with the way Sri Lanka came back after not bowling well at the start of the Zimbabwe innings, adding: "(Brendan) Taylor (80) played well but I think we came back strong.

"It's a sad moment for me but a happy moment for the team because we've qualified for the next round," he said, referring to his last game in Kandy.

Dilshan said it had been a good pitch to bat on and he was relieved to make a big score once set.

"I'm really disappointed that for a few matches I got the start but didn't capitalise," he said, adding he was positive about Sri Lanka's chances in the tournament.

"Taylor and Chakabva played well in the first 20 overs. I thought we were in the game from there but I guess you need skill to chase 325."

"We just have to take the positives and learn from what we did wrong and hopefully we'll put it into practice in the next game," he added.