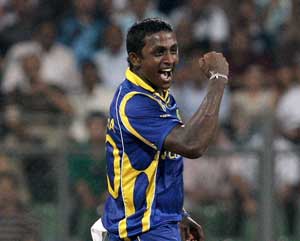 Muttiah Muralitharan, Ajantha Mendis and left-arm spinner Rangana Herath could all pose a tough challenge for the English batsmen on Saturday on a R. Premadasa Stadium wicket which tends to keep low and slow.

Muralitharan hurt his hamstring while batting during a 153-run win over New Zealand but returned to bowl and took four wickets in the match last week.

Sri Lanka is expecting the world's leading wicket taker to be available for the make-or-break match. Muralitharan, who will turn 39 next month, will retire after the World Cup.

"I have been carrying this hamstring injury for some time and it's not a problem," Muralitharan said after win over New Zealand. "I am prepared to play the rest of the matches because I am retiring."

Lasith Malinga was the lone frontline Sri Lanka fast bowler in the game against Australia at the same venue earlier this month before heavy rains abandoned the game and both teams shared the points.

None of the Sri Lankan bowlers got a chance in that match. Sri Lanka was 146-3 in the 33rd over before rain spoilt the game but there were signs of enough turn for Australian spinners Jason Krejza and Steve Smith.

The top order's commanding form with the bat does have one slight drawback coming into the knockout stage, because the lower middle-order hasn't spent any quality time at the crease.

Chamara Silva has scored just one half century - 57 against Pakistan - when none of the top four could pass the 50-run mark in the narrow, 11-run loss. Thilan Samaraweera has a top score of 34 not out against Australia and it would be interesting to see how the middle-order copes if Sri Lanka loses early wickets against England.

Chief selector Aravinda de Silva, who scored a century in Sri Lanka's win over Australia in the 1996 World Cup final, believed his country will face "real challenge when they confront England."

"England will be a tough opposition to beat as they have the potential to upset any side on that particular day," De Silva told Daily News on Tuesday.

The chief selector felt England had enough quality batsmen to bat against spinners after spending well over a month by playing on subcontinent wickets.

Only once in five World Cup games have teams batting first scored more than 200 runs at the R. Premadasa Stadium. Pakistan successfully defended its total of 277-7 against Sri Lanka.

Comments
Topics mentioned in this article
Cricket England Cricket Team Australia Cricket Team West Indies Cricket Team Sri Lanka Cricket Team World Cup 2011
Get the latest updates on ICC T20 Worldcup 2022 and CWG 2022 check out the Schedule, Live Score and Medals Tally. Like us on Facebook or follow us on Twitter for more sports updates. You can also download the NDTV Cricket app for Android or iOS.