Fast bowler Jade Dernbach may have become the fifth South African-born player to form part of the England squad, but he insisted on Tuesday that his dream is an English World Cup triumph. 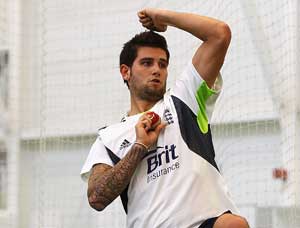 Fast bowler Jade Dernbach may have become the fifth South African-born player to form part of the England squad, but he insisted on Tuesday that his dream is an English World Cup triumph.

Dernbach, who was called up as a replacement for the injured Ajmal Shahzad, joins fellow South African-born teammates - skipper Andrew Strauss, Matt Prior and Jonathan Trott - preparing for the quarterfinal against Sri Lanka.

Missing from the squad now is Kevin Pietersen, another South Africa native, who was forced out of the tournament two weeks ago.

"I was born in South Africa but that's no more my home. I have not done anything in South Africa," said Johannesburg-born Dernbach, whose family moved to England when he was 14.

"I was just born there but my whole cricket career is based in the UK and the UK is my home and I want to give everything I can for England because that's my country and I love it."

The 24-year-old Surrey pace bowler was flown in from the Caribbean where he was playing for the England Lions in the West Indies regional event after Shahzad suffered a hamstring injury.

"It was a very pleasant surprise, a nice wake up call in the Caribbean," said Dernbach of his surprise selection over Chris Woakes, who had been part of England one-day set-up in Australia last month, and Liam Plunkett.

"I can't think of anything better," added Dernbach of his chances of playing in Saturday's last-eight clash against Sri Lanka.

"Any opportunity to play for your country you need to grab with both hands."

The right-arm medium pacer is the third replacement in England's World Cup squad after Pietersen and Stuart Broad were also forced out.

Dernbach hoped his stint at the Dennis Lillee pace bowlers academy in Chennai will help him on the sub-continent wickets if he gets an opportunity to play.

"I know these wickets are challenging, but that's why we play the game, to challenge ourselves and I hope I am able to share my skills out there if I get a chance," said Dernbach.

Comments
Topics mentioned in this article
South Africa Cricket Team Cricket World Cup 2011 Jade Dernbach
Get the latest updates on ICC T20 Worldcup 2022 and CWG 2022 check out the Schedule, Live Score and Medals Tally. Like us on Facebook or follow us on Twitter for more sports updates. You can also download the NDTV Cricket app for Android or iOS.