Title aspirants South Africa will look to shed their chokers tag and take a step closer to the World Cup title when they lock horns with an inconsistent New Zealand in the third quarterfinal on Friday. 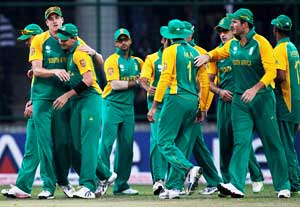 Title aspirants South Africa will look to shed their chokers tag and take a step closer to the World Cup title when they lock horns with an inconsistent New Zealand in the third quarterfinal on Friday.

South Africa started their World Cup campaign in a rollicking fashion beating West Indies and Holland but the choker tag came back to haunt them against England when they failed to chase down a target of 171 and folded up for 165.

But Graeme Smith's men bounced back to beat the mighty Indians in their next match and then blew away Ireland and Bangladesh to finish on top of the Group B table.

Although their brilliance has never been in doubt, three-time semifinalist South Africa have always faltered when the World Cup approached business end.

In their maiden Cup appearance in 1992, a bizarre rain-rule left them needing 21 runs off one ball, while in 1996 an unbeaten South Africa headed into a rampaging Brian

Lara of West Indies to see their dreams shattered. If that was not enough, three years later, a suicidal run from Lance Klusener when South Africa needed just one run with one wicket remaining resulted in a tie and Australia sneaked into the final due to better net run-rate.

The ghost of the World Cup again came back to haunt them at home in Durban in 2003 when needing just one run to win the rain-affected match against Sri Lanka, Mark Boucher defended the final ball, miscalculating the Duckworth-Lewis target.

So given their past, Smith's men would hope that lady luck smiles on them on Friday and they don't do anything foolish and spoil their World Cup dreams.

For South Africa, AB de Villiers and Hashim Amla have done the bulk of the scoring, piling up 318 and 299 runs at 106 and 49.83 average respectively. JP Duminy and Jacques Kallis have also contributed well for the team.

In the bowing department, pace duo of Morne Morkel and Dale Steyn have been consistent with the new ball but it is the spinners Robin Peterson and Imran Tahir who have troubled the oppositions most, claiming 14 and 12 wickets respectively in the tournament.

While his colleagues have been dealing in wickets, spinner Johan Botha with four wickets from four matches kept the runs in check.

But the major concern for South Africa is captain Smith's indifferent form. The left-hander has scored only 155 runs so far in the tournament and is due for a big one on Friday.

New Zealand, on the other hand, have done well to enter the quarterfinal stage, given their poor performance before the World Cup.

The Kiwis were whitewashed by Bangladesh and India in an ODI series and had lost their home series to Pakistan 2-3 two weeks before the World Cup.

In the quadrennial event, New Zealand blew hot and cold, winning four matches and losing two against Australia and Sri Lanka to finish fourth with eight points in Group A.

Their most sensational victory was the 110-run triumph over Pakistan in Pallekele where Ross Taylor gave a stunning display of power-hitting on his 27th birthday and South Africa should not make the mistake of taking them lightly.

"We know we're up against a quality team and if we're not on top of our game it's going to be a tough match," South Africa off-spinner Johan Botha said.

Up against the Proteas, the Kiwis can take heart from the fact that they have won three of their five World Cup meetings against them, including a five-wicket success in the Super Eights round of the 2007 edition.

For New Zealand, Kylie Mills, Tim Southee and Jacob Oram have been quite impressive with the ball. Also skipper Daniel Vettori is set to return tomorrow after missing the last two matches against Canada and Sri Lanka due to a knee injury.

Fast bowler Daryl Tuffey will also join the pace attack in place of injured Hamish Bennett, who flew back home after injuring his calf muscle while bowling against Sri Lanka at the weekend.

"I should be okay to get through batting and bowling, it is just the running around that is hampering me a little bit. I am confident of playing the quarterfinal," Vettori said.

Comments
Topics mentioned in this article
World Cup 2011 Pakistan Cricket Team Cricket South Africa Cricket Team New Zealand Cricket Team
Get the latest updates on ICC T20 Worldcup 2022 and CWG 2022 check out the Schedule, Live Score and Medals Tally. Like us on Facebook or follow us on Twitter for more sports updates. You can also download the NDTV Cricket app for Android or iOS.