South Africa skipper Graeme Smith said Saturday that successfully chasing nearly 300 to beat India was a "massive thing" for his team after a confidence-sapping defeat to England. 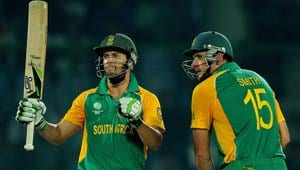 South Africa skipper Graeme Smith said Saturday that successfully chasing nearly 300 to beat India was a "massive thing" for his team after a confidence-sapping defeat to England.

Needing 13 to win in the last over off seamer Ashish Nehra, South Africa found an unlikely star in Robin Peterson who plundered 16 runs off the first four balls to help his side overhaul India's 296 all out.

India looked set to post a mammoth total when they reached 267-1 following Sachin Tendulkar's brilliant 111 for his 48th one-day hundred, but lost their last nine wickets for just 29 runs in nine overs.

Man of the match Dale Steyn (5-50) played a key role in his team's fightback to bag his maiden five-wicket haul in one-day internationals.

"For 15 overs up front we took an absolute beating but for 75 we played some incredible cricket," said Smith after the three-wicket win.

"Chasing 300 on that deck, second innings was a hell of an effort from the guys and I think we're all pretty speechless at the moment."

He said India's openers had put his side under "massive pressure" at the start of their innings but the Proteas had "showed a lot of composure."

"When we got our chance we took it with some great bowling by Dale and a couple of the other guys chipped in," he said.

"To get over the line chasing for us is just a massive thing."

And he said they had learned lessons both from the six-run defeat against England and the win over the host nation.

"The confidence you get out of a win like this is huge so hopefully we can build on this now."

Fast bowler Steyn said: "After my first five overs I was staring down the barrel wasn't I? But I think we all pulled it back beautifully. It was a fantastic display by the batters too, to reach that total. Overall a great team performance."

Indian skipper Mahendra Singh Dhoni backed his decision to bring back Nehra for the final over.

And he said the batsmen had earlier lost their way in front of a huge home crowd.

"You don't play for the crowds. They always want you to hit sixes and fours but if you lose quite a few wickets in the powerplay or with overs to spare, it's always better that the batsmen play the overs, delay your slog a bit and get maybe a par score and don't look for that extra 20 or 25 runs," he said.

"Overall I think the performance was good. If we could have fielded a bit better it definitely would have made the score look slightly bigger but at the same time we're not a side which is known for fielding," he added.

Comments
Topics mentioned in this article
Graeme Smith World Cup 2011 Cricket
Get the latest updates on ICC T20 Worldcup 2022 and CWG 2022 check out the Schedule, Live Score and Medals Tally. Like us on Facebook or follow us on Twitter for more sports updates. You can also download the NDTV Cricket app for Android or iOS.