With Group B's headline clash, between South Africa and India, just a few hours away, the media conjured up a gale force of questions, many of them not about the upcoming game. 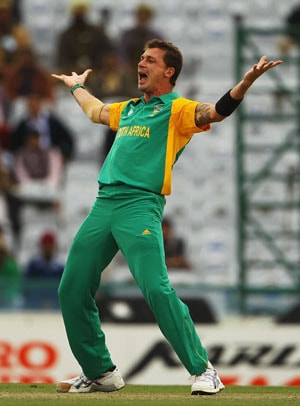 Graeme Smith may have anticipated walking into a wind tunnel for his pre-match press conference at the VCA Stadium. With Group B's headline clash, between South Africa and India, just a few hours away, the media conjured up a gale force of questions, many of them not about the upcoming game.

It began as a breeze, with a few small chats about bowling options, got gustier once the line of questioning changed to mindset, and then the hurricane arrived. "This team usually arrive as favourites and end up being branded chokers, how do you stay sane?"

The reporter meant little malice, but it was just the type of question that had the possibility to annoy Smith. But he was stronger than that.

The smile stayed on his face as he answered. "The sanity in the squad is keeping all the outside influences out," Smith said. "We've been able to put a decent perspective on things in the group."

It's the angle that Smith and his team are viewing things from that refused to allow him to be swayed by the sentiment that the loss against England has left them in crisis, not necessarily as far as qualifying for the knockouts goes, but mentally. Smith said that it has not. "I'd like to think that our confidence and strength within the group is more powerful than one result."

What that one result seems to have done is given the team the confidence to face the graves of all their past stumbles that the critics have dug up. "Our past is our past and we can't hide from it. There is no point in trying to hide from the perception [that we struggle under pressure], the current group of players have to challenge the perception."

Even if it means that until they win a major tournament, they will be challenging that perception every time they step onto a cricket field, it's something they are willing to do.

The challenge starts again against India, who South Africa beat 3-2 in an ODI series at home before this World Cup, and at a venue where they have enjoyed success, albeit in a Test match, just a year ago.

"I think I've spent a month of my life in Nagpur now, so we know it pretty well," Smith joked before turning to the more serious matter of the value that familiarity of the opposition will add.

Although the Indian ODI squad in South Africa was without Virender Sehwag, Gautam Gambhir and Sachin Tendulkar, Smith feels that South Africa have seen enough of them to feel comfortable that they have adequate first-hand knowledge of India. "We know each other quite well having spent the whole summer playing against each other. It's going to be a wonderful occasion and we're looking forward to it."

The Indian batting line-up, in particular the three who missed the series in South Africa, will be drooling at the sight of the Nagpur pitch, devoid of grass and promising runs. What they have to come up against is a South African attack that has conceded less than 230 in all three outings in the tournament so far.

Besides being disciplined, they've been dangerous and have bowled out all three sides they have come up against. "As a bowling unit, we've been very strong and our unpredictability stands us in good stead," Smith said.

It's the element of surprise that makes them so different to the seam-heavy attacks of the past and the fact that all bowlers are now wicket-takers that makes them a tricky attack to plan to. While Dhoni said he was happy for his bowlers to concede sparsely and not take wickets some of the time, Smith feels it's the attacking intent which has proved a good form of defence for them. "We feel it's the best way to curb run-rate and to control the game. We've got a lot of wicket-taking options in our line-up, which is what we wanted."

With legspinner Imran Tahir a doubtful starter, South Africa may bring back left-armer Lonwabo Tsotsobe, who has not played a game in the tournament yet. He was the leading wicket-taker in the series against India, with 13 scalps and in batsmen-friendly conditions, the extra seamer could be a better option than the extra batsman.

With the bowling options appearing limitless, and the batting strong, South Africa seem to have few worries ahead of the big match. Smith wasn't allowed to breathe in the fresh air outside the media cauldron, or even just a sigh of relief, before being asked about his own nemesis, Zaheer Khan, who has the better of him in five out of 13 ODIs. "He is a quality bowler but I have worked on a few things with Duncan [Fletcher] and hopefully it will pay off."

Comments
Topics mentioned in this article
Graeme Smith World Cup 2011 India Cricket Team South Africa Cricket Team Cricket
Get the latest updates on ICC T20 Worldcup 2022 and CWG 2022 check out the Schedule, Live Score and Medals Tally. Like us on Facebook or follow us on Twitter for more sports updates. You can also download the NDTV Cricket app for Android or iOS.