Pakistan speedster Shoaib Akhtar will announce his plans of retiring after the World Cup on  Thursday, according to team manager Intikhab Alam. 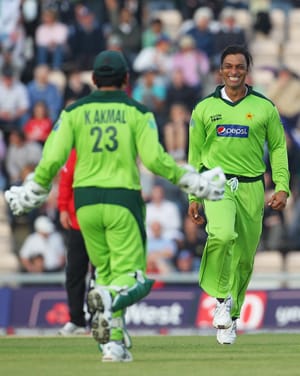 Pakistan speedster Shoaib Akhtar will announce his plans of retiring after the World Cup onÂ  Thursday, according to team manager Intikhab Alam.

The pacer also known in the cricket circles as the 'Rawalpindi Express' is likely to announce his decision to call it quits later in the day and with it, he will bring an end to a career that has been known more for controversies than sheer pace and wicket-taking abilities.

The maverick pacer made his ODI debut against Zimbabwe in 1998 and took the world by storm with his pace. His ability to bowl fast yorkers and bouncers helped him claim scores of wickets.
Akhtar however, constantly kept himself embroiled in controversies as well.

Inconsistant form haunted his career for a span of time but other factors like drug-controversy, ball tampering, fitness issues, verbal volleys both on the field and off it, earned Akhtar a bad reputation in the sport.

While he had already announced that this edition of the World Cup would be his last, retirement perhaps was always on the cards for the pacer. Final word though, remains to be officially announced.

Comments
Topics mentioned in this article
World Cup 2011 Cricket Shoaib Akhtar New Zealand Cricket Team Pakistan Cricket Team
Get the latest updates on India vs South Africa and check out  Schedule, Results and Live Score. Like us on Facebook or follow us on Twitter for more sports updates. You can also download the NDTV Cricket app for Android or iOS.