Shoaib Akhtar quits with no regrets

Shoaib Akhtar, whose colourful career has been a heady mix of on-field brilliance and off-field controversy, will quit international cricket after the World Cup. 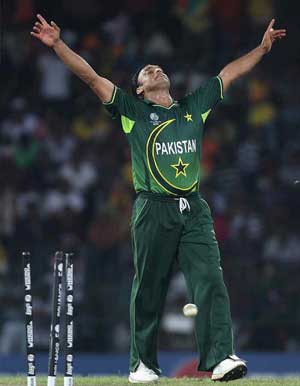 Pakistan's maverick paceman Shoaib Akhtar, whose colourful career has been a heady mix of on-field brilliance and off-field controversy, will quit international cricket after the World Cup. (Shoaib Akhtar's career timeline | In pics: Journey of the Rawalpindi Express )

Akhtar made up his mind after Pakistan's 110-run defeat against New Zealand, in which he went for 70 runs in his nine overs.

"I have no regrets. I made lots of friends but some people have misunderstood me. I thank all the players who played with me and against me.

"It was an honour to have played with Wasim Akram and Waqar Younis. I never imagined I would play for Pakistan. It was my greatest moment.

"Pakistan's last match in this World Cup will also be my last. I hope that will be the final on April 2."

After his mauling against New Zealand, Akhtar was rested for the match against Zimbabwe on Monday and was thought to be an unlikely starter for Saturday's last Group A match against Australia.

Akhtar, who made his international debut in 1997, took 178 wickets in 46 Tests, the last of which was against India at Bangalore in 2007.

Pakistan squad members hugged him in the dressing room on Thursday before captain Shahid Afridi embraced him as the players entered the R. Premadasa stadium in Colombo for practice.

"I want to be remembered as an honest and patriotic player who never trod a wrong path," said Akhtar.

Akhtar, known as the Rawalpindi Express during his tearaway days as one of Test cricket's most feared if unpredictable talents, once cracked the 100mph barrier at the 2003 World Cup.

At this World Cup, which was always likely to be his swansong, he looked neat and tidy with figures of 0-10 and 2-42 against Kenya and Sri Lanka respectively.

He missed the win over Canada before being smashed all over the park at Pallekele against New Zealand -- including 28 runs off his last over -- and was dropped for the game with Zimbabwe.

His career will always be remembered for a series of fitness problems, discipline violations as well as a doping offence that put the brakes on achieving his true potential.

Most recently he was fined $2,000 for breaching discipline after the defeat to New Zealand.

Team manager Intikhab Alam confirmed the fine, which was levied after an on-field spat with wicket-keeper Kamran Akmal, who missed two chances off his bowling.

Akhtar and the now banned Mohammad Asif failed drugs tests in 2006 and were suspended for two years and one year respectively, both of which were lifted on appeal.

Fitness problems forced him to miss the 2007 World Cup while he was fined heavily and banned for 13 ODIs after he hit Asif with a bat two days before the 2007 World Twenty20 in South Africa.

In 2008 he was banned for five years after publicly criticising the Pakistan Cricket Board following his exclusion from the list of centrally contracted players.

The ban was reduced to 18 months by a tribunal, which levied a fine of 7.0 million Pakistani rupees ($105,000 at the time). His appeal against the ban is still pending.

Akhtar's last delivery against New Zealand -- which may prove his final one at international level if he doesn't get another chance at the World Cup -- was hit for six by Ross Taylor.

Comments
Topics mentioned in this article
World Cup 2011 Cricket Shoaib Akhtar New Zealand Cricket Team Pakistan Cricket Team
Get the latest updates on ICC T20 Worldcup 2022 and CWG 2022 check out the Schedule, Live Score and Medals Tally. Like us on Facebook or follow us on Twitter for more sports updates. You can also download the NDTV Cricket app for Android or iOS.