Shoaib Akhtar's career timeline after the Pakistan pace bowler on Thursday announced his retirement from international cricket after the World Cup. 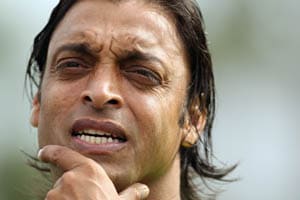 Shoaib Akhtar's career timeline after the Pakistan pace bowler on Thursday announced his retirement from international cricket after the World Cup.

Removed from the team for the Sahara Cup against India in Canada on grounds of indiscipline.

Akhtar makes his Test debut against the West Indies in November at his home ground in Rawalpindi, taking two wickets.

Akhtar's action called for the first time, but the International Cricket Council (ICC) allows him to carry as only his bouncer causes concerns.

Action called for third time in Sharjah, after which Pakistan Cricket Board (PCB) carries out examination at University of Western Australia which concludes his action is result of "unique physical characteristics" which form basis of him being cleared to continue.

Reprimanded for ball-tampering and banned for one ODI after throwing water bottle at a spectator in Zimbabwe.

Akhtar bowled at 100mph in Pakistan's match against England at Cape Town, becoming the first bowler in the history of the game to break the 100mph barrier.

Akhtar and Mohammad Asif test positive for banned steroid nandrolone. Akhtar banned for two years and Asif for one year, bans which were lifted on appeal.

Akhtar hits Asif with a bat, two days before the World Twenty20 in South Africa. A month later the PCB fine and ban him for 13 one-day matches

Excluded from list of central contracts. A fuming Akhtar criticises the PCB. A disciplinary committee bans him for five years. Punishment reduced to 18 months on appeal, but fine imposed

Selected in Pakistan's World Cup squad, despite coach Waqar Younis saying he is not 100 percent fit.

Akhtar announces he will retire after the World Cup

Comments
Topics mentioned in this article
New Zealand Cricket Team Pakistan Cricket Team World Cup 2011 Shoaib Akhtar Cricket
Get the latest updates on India vs South Africa and check out  Schedule, Results and Live Score. Like us on Facebook or follow us on Twitter for more sports updates. You can also download the NDTV Cricket app for Android or iOS.