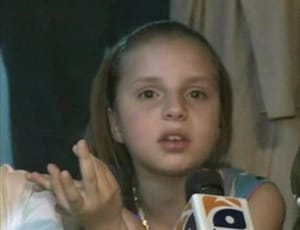 "I am hurt and sad that we lost the match. I was so excited that we will beat India," Aqsa said before breaking down into tears on camera on Geo News channel. Afridi's youngest daughter blamed Misbah-ul-Haq for the defeat.

"Misbah realised very soon that he needed to score runs," she said sarcastically.

The Pakistan team is going to return home via Dubai today and the former players, politicians and cricket fans are calling for the team to be given a warm welcome despite their defeat to India.

"We need to be mature in our acceptance of the defeat to a better team. But one can understand the sentiments of the people who are disappointed with the defeat," former captain Moin Khan said.

While the feeling of despondency and disappointment could be felt among the people a day after the defeat, but in general there is a sense of appreciation for the team's performance in the mega-event.

So intense was the interest in the match that around 25,000 people showed up at the Gaddafi stadium in Lahore yesterday to watch the match live on three giant screens, installed by the Pakistan Cricket Board (PCB) on government instructions.

While in Karachi around 30 people were injured in celebratory firing by cricket enthusiasts. Leading politicians including those belonging to the ruling and opposition parties backed the team and lauded its performance for making it to the semi-finals.

Punjab's Chief Minister, Shahbaz Sharif led the voice of approval, promising to receive the team himself and announcing a cash award of half a million rupees for each player.

"The team has done us proud by reaching the semi-final and they played a close match and fought hard against India. We must appreciate that," Shahbaz told Geo News channel.

Even Maulana Fazlur Rehman, the leader of the religious Jamiat Ulema-e Islam despite narrowly escaping from a suicide attack in Swabi in the north western province, sent out a message to the players hailing their performance in the World Cup.

"The team must be supported because they didn't let us down and did well to play hard in the semi-final. Win or defeat is part of sports and we should accept that gracefully," he said on a channel.

Altaf Hussain, the chief of the Mutthaida-e-Qaumi Movement also called on the people to show restraint and maturity and not run down the team.

"The players have made us proud and we must support and appreciate their performance although they lost," he said. Even in the newspapers the tone was of disappointment but the message was loud and clear that the team had provided a breakthrough opportunity for both countries to resume friendly ties and talks.

"The News International" daily newspaper said in its editorial "Lost and won" that the team could not make it in the end but had fought like brave men.

"They fought like brave men and lost to a better team that had the added advantage of playing at home before a cheering crowd," the editorial said.

"Their could be many reasons and many scapegoats for the defeat but it must be said the Pakistani boys did a much better job than was being expected of them before the tournament," it added.

The widely circulated "Dawn" newspaper in its editorial -- "Mohali summit," noted that the two Prime Minister's met in Mohali in an environment enlivened by what by any standards was a carnival in itself is a big achievement.

But despite the positive notes in the editorials, the despondency of losing to India was visible on the front pages of many newspapers while the channels that had raged on about the match in its build-up also adopted a more sombre mood after the defeat.

Some channels while doing a post-mortem of the match, accused the Pakistani players of failing when it mattered the most.

"Cricket mania evaporates after anti-climax" the Dawn said in a front page story.

"Bad fielding and batting sink Pakistan in semi final," said the Jang newspaper in its lead story while, "The News" read: "Nation stunned over semi-final defeat."

There were also the usual reports about frenzied and angry fans breaking television sets, a student taking poisonous pills and a man dying of a heart attack in Faisalabad.

Comments
Topics mentioned in this article
World Cup 2011 Shahid Afridi India Cricket Team Pakistan Cricket Team Cricket
Get the latest updates on ICC T20 Worldcup 2022 and CWG 2022 check out the Schedule, Live Score and Medals Tally. Like us on Facebook or follow us on Twitter for more sports updates. You can also download the NDTV Cricket app for Android or iOS.