Both players, with more than 500 One-Day Internationals between them, were dropped on form for next month's Champions Trophy in England and Wales, but will be given monthly retainers of around $3,600. 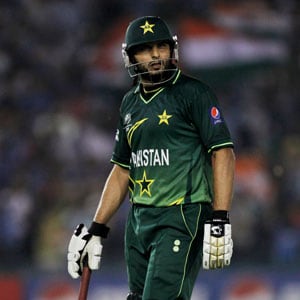 Allrounder Shahid Afridi and batsman Younis Khan were surprisingly awarded category A contracts by the Pakistan Cricket Board on Tuesday, plus a pay rise of 15 per cent.

Both players, with more than 500 One-Day Internationals between them, were dropped on form for next month's Champions Trophy in England and Wales, but will be given monthly retainers of around $3,600.

Afridi, retired from Tests, still hopes to play in the 2015 World Cup, while Khan is wanted for Tests.

Test and ODI captain Misbah-ul-Haq, Twenty20 captain Mohammad Hafeez and offspinner Saeed Ajmal were the only others to receive category A contracts.

Fast bowler Umar Gul, Umar Akmal and Abdur Rehman were demoted to category B, worth $2,500 a month, along with five other players.

Gul had been ruled out of the Champions Trophy due to injury, but it was another PCB surprise that the paceman was demoted from category A despite consistently playing in all three formats of the game.

Test opener Taufeeq Umar and fast bowler Aizaz Cheema, who were in category B previously, were demoted to category C.

The Akmal brothers, Kamran and Adnan, were among eight players in category C for retainers of $1,400 each.

Left-handed opening batsman Nasir Jamshed was promoted from C to B.

The PCB also awarded stipends of $700 to nine players.

All 30 contracts were only for this year. After the Champions Trophy, Pakistan tour West Indies, and then host South Africa and Sri Lanka.

Last year, the PCB gave players a raise of 25 percent after renewing their 2009 contracts.

Comments
Topics mentioned in this article
Cricket Zulqarnain Haider Mohammad Hafeez Shahid Afridi Pakistan Cricket Team New Zealand Cricket Team World Cup 2011 Ijaz Butt Younis Khan
Get the latest updates on ICC T20 Worldcup 2022 and CWG 2022 check out the Schedule, Live Score and Medals Tally. Like us on Facebook or follow us on Twitter for more sports updates. You can also download the NDTV Cricket app for Android or iOS.