Shahid Afridi pronounced himself "proud" of his team's performance in the World Cup and hoped that their reception on arrival in Pakistan would reflect the side's achievement in getting to the last four at a time when expectations were significantly lower. 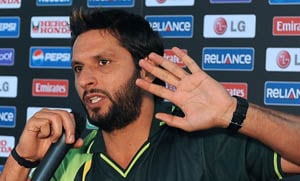 Shahid Afridi pronounced himself "proud" of his team's performance in the World Cup and hoped that their reception on arrival in Pakistan would reflect the side's achievement in getting to the last four at a time when expectations were significantly lower.

Pakistan lost by 29 runs to India in Mohali in a scrappy match, in which they were generally off their game with bat, ball and, most damagingly, in the field. They were in with a chance at various stages, including when they began the chase, only to let it slip each time.

Afridi said the batting, their weaker suit, had been problematic again. There were several starts but no stand greater than the opening one of 44. "We were struggling to build partnerships right through the tournament," he said. "The matches where we had partnerships we made good scores. Because we couldn't make partnerships, today we struggled and played some bad shots at the wrong time as well."

But their run-in to the game, with only one loss in seven matches, came after another period of turmoil which saw them lose three key players in last year's spot-fixing scandal, including a dangerous new-ball opening pair in Mohammad Asif and Mohammad Amir. To add to the instability, Afridi wasn't appointed captain until two weeks before the tournament began but an unheralded Pakistan side beat Sri Lanka, Australia and West Indies en route to the semi-final.

Afridi had said before the tournament he wanted his team in the last four and despite the loss, seemed in generally upbeat mood. "I am proud of my team and the boys have done a great job in this World Cup. A few of the youngsters are very promising and we played as a unit. Winning and losing is something different but we really played really good cricket and no one was expecting us to play cricket like this. As captain I'm very happy."

The run was Pakistan's best in a World Cup since 1999, when they were runners-up to Australia. In 2003 and 2007 they were eliminated before the knock-out stages, disastrous results which led to intense anger and criticism on their return. It is unlikely Afridi's side will receive a similar reception though already the early signs of reaction from Pakistan seemed to focus on Misbah-ul-Haq's slow batting in the chase as the cause of defeat.

"We have played better than those sides [of 2003 and 2007] and they were good sides," Afridi said. "We didn't have much hope from this side but I have respect for my team. Reception? We will go back, people will give us confidence, they backed us. If those people who make us stars say a little what's wrong with that? It's nothing big. Nobody wanted Pakistan to lose, we wanted to win, but people I think realize we gave it our all. To win six games from eight is a big achievement."

A few incidents apart, Pakistan went through the tournament without any major scandal and a visible sense of unity and togetherness within the squad. That in itself was a minor triumph given what had gone before. "The difficult circumstances we played cricket in, the difficult circumstances we have gone through in the last nine-ten months, to build this team and the effort we put in was phenomenal.

"I'd like to thank the PCB chairman for giving me support and the way the boys supported each other and me, the management and the coach, they really helped me a lot. To take a broken team, make it into a team for the World Cup and to perform like no one was expecting, I'm happy with that."