Australia have already secured its World Cup quarterfinal place and faces what should be its easiest game in the group, but captain Ricky Ponting doesn't see any reason to keep his best line up off the field. 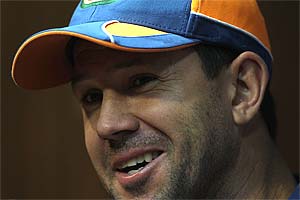 Australia have already secured its World Cup quarterfinal place and faces what should be its easiest game in the group, but captain Ricky Ponting doesn't see any reason to keep his best line up off the field.

Australia meet Canada on Wednesday and will go top of Group A with a win, ahead of Saturday's match against Pakistan that will decide the final placings and the quarterfinal opposition.

Ponting insisted on Tuesday he wasn't so much worried about the group permutations, but making sure Australia peak at the right time.

"One of our great keys to success in previous World Cups is we've been able to build our way up through the tournament," Ponting said. "And when the semifinal and final have come around is generally when we've been playing our best cricket."

Australia were certainly not at its best in Sunday's 60-run win over Kenya, although Ponting was keen to highlight the value of playing 100 overs after the team's sparse schedule at the start of the tournament.

In the Kenya game, Ponting experimented with his bowling attack, and in particular spinners Jason Krejza and Steve Smith, who are still yet to have an impact at the tournament. But the time for experimentation is now over, according to the captain.

"I think it's important that from here we start to put in place what we think is the best way for us to win big games of cricket," he said. "We'll look at doing that certainly tomorrow.

"We've got to give our guys the most exposure that we can to different situations in games. From now on, I don't think we can afford to be experimenting too much, we have to get down to playing a brand of cricket that's going to hold up in big games."

And while Ponting said he was pleased to have had a good workout against Kenya, he is hoping for a more comfortable time against a Canada side that has won one of its five games so far.

"I'd hope to think we have a good enough and skilful enough team to win tomorrow's game and win it comfortably," he said. "That's certainly the approach we'll take into the game as we do for every game, we want to win very game as easily as we possibly can.

"It's about us now putting the foot down and playing the way we want to play."

Comments
Topics mentioned in this article
Australia Cricket Team Ricky Ponting World Cup 2011 Cricket
Get the latest updates on ICC T20 Worldcup 2022 and CWG 2022 check out the Schedule, Live Score and Medals Tally. Like us on Facebook or follow us on Twitter for more sports updates. You can also download the NDTV Cricket app for Android or iOS.