Sri Lanka captain Kumar Sangakkara insisted that the loss of another point in Saturday's washout against Australia will not damage their World Cup dream. 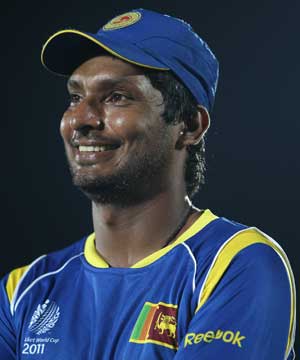 Sri Lanka captain Kumar Sangakkara insisted that the loss of another point in Saturday's washout against Australia will not damage their World Cup dream.

Sri Lanka had already been beaten by Pakistan before facing the defending champions and now have five points from four games, the same tally as Australia who have played a game less.

Pakistan, with a perfect six points from three matches, lead the way in Group A from where the top four teams qualify for the quarter-finals.

"One point is better than no point," said Sangakkara after his team won the toss and had reached 146-3 in 32.5 overs before rain halted play at the R. Premadasa stadium on Saturday.

"It doesn't matter as long as you qualify (for quarters)."

"We need to beat every single good team to get into the final and to win the World Cup, so that's where we are at the moment and the defeat against Pakistan is behind us," said Sangakkara of the narrow 11-run loss last week.

Sangakkara, whose 73 not out had led his team's recovery after being 75-3, said his team was in the game when rained spoiled a potentially good match.

"The game was really well-poised, 18 overs to go and we were realistically looking at anything close to 250 or, maybe, even slightly above, it could have been a great game of cricket had it continued," said the Sri Lankan captain.

The Australian pace duo of Brett Lee and Shaun Tait had removed Tillakaratne Dilshan (four) and Upul Tharanga (six) before Mahela Jayawardene (23) was run out.

Sangakkara and Thilan Samaraweera (34 not out) had added 71 for the fourth wicket before the match was abandoned, leaving a sell-out 35,000 crowd disappointed.

"Unfortunately it was the first time it really rained during the World Cup and for the entire crowd, expecting a good game, it was disappointing," said Sangakkara.

Sri Lanka next play Zimbabwe at Pallekele on Thursday, before going to India to face New Zealand in Mumbai on March 18.

Comments
Topics mentioned in this article
World Cup 2011 Nathan McCullum Kings XI Punjab Kumar Sangakkara Sri Lanka Cricket Team Cricket
Get the latest updates on ICC T20 Worldcup 2022 and CWG 2022 check out the Schedule, Live Score and Medals Tally. Like us on Facebook or follow us on Twitter for more sports updates. You can also download the NDTV Cricket app for Android or iOS.