Sri Lanka captain Kumar Sangakkara believes his team's qualification for the World Cup final can further unite a country steadily finding its feet after the end of a decades-long civil war. 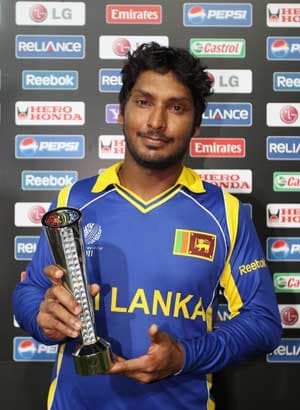 Sri Lanka captain Kumar Sangakkara believes his team's qualification for the World Cup final can further unite a country steadily finding its feet after the end of a decades-long civil war.

Sri Lanka reached their second successive final, and third in all, with a nervy five-wicket win over New Zealand on Tuesday.

Sangakkara used the opportunity to stress the significance of the win for the country's cohesion.

"Cricket has always been the panacea that heals all in Sri Lanka, so winning the World Cup final would be huge for the country," said Sangakarra, who praised his team's national pride.

"There are times when there is talk of the Indian Premier League, the money involved and everything. But let me tell you, we take pride in playing for our country.

"If you go to the dressing room, you will see that every player has a flag on their seat."

Sri Lanka, who won their only World Cup in 1996, are desperate to make amends for the disappointment of 2007 when they lost in the final to Australia in Bridgetown.

"It means a lot to us, that's what we have planned for. We missed a great opportunity in 2007," said the captain, named man of the match in Tuesday's win over New Zealand.

"So, for us, it was important to recreate those opportunities in 2011 and we did."

But Sangakkara also warned over complacency creeping into a team which demolished England by 10 wickets in the quarter-final before overcoming a slight wobble against the Kiwis to win with 13 balls to spare.

"It's easy to get carried away. We've won a semi-final but we haven't won a final, so we need to keep our heads down and keep playing good cricket," said the captain.

"We must understand that there's a lot of work to do in the next three days to play in the biggest match of our lives," said Sangakkara of Saturday's final in Mumbai, where they'll meet either India or Pakistan.

Sangakkara, who hit a crucial 54 in Tuesday's game, praised opener Tillakaratne Dilshan, who made 73, as well as his middle-order batting which overcame the loss of four quick wickets chasing a 218 target.

"Dilshan batted brilliantly but we got tense towards the end, basically because Dilshan and I should have finished it off or got us close to the 200-run mark," said Sangakkara of the collapse which saw the fall of four wickets for just 25 runs.

Thilan Samaraweera (23 not out) and Angelo Mathews (14 not out) saw their team home during an unfinished 35-run stand.

"Being two down with 60 runs to go we should have been a bit clinical, but probably in hindsight it was good for the middle order to show us what they can do as well," said Sangakkara.

Sangakkara praised spinner Muttiah Muralitharan who took a wicket off the last ball in his last match before a home crowd. The 38-year-old off-spinner will retire after the final.

"It was emotional because it was the last World Cup match we were playing in front of our home crowd. It was a very special moment for us, and even more so because it's the last time for Murali playing on home soil.

"When the magnitude of the occasion hits you it kind of overwhelms you. It's much easier playing cricket than realizing that you are going to probably play the last match with the world's best bowler," said Sangakkara.

"Every time he has played he has done wonders for us, the good thing about Murali is he has no ego, and definitely our fans will miss him."

Comments
Topics mentioned in this article
New Zealand Cricket Team Kings XI Punjab Pakistan Cricket Team Sri Lanka Cricket Team Nathan McCullum Cricket Kumar Sangakkara World Cup 2011
Get the latest updates on India vs South Africa and check out  Schedule, Results and Live Score. Like us on Facebook or follow us on Twitter for more sports updates. You can also download the NDTV Cricket app for Android or iOS.